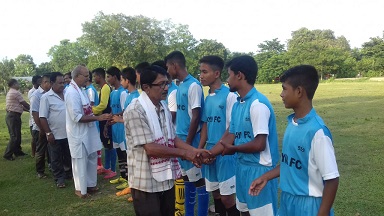 Players being introduced to the guests before the start of the inaugural match at Mangaldai. Image - Northeast Now

The host, Chapai Yuva Kalyan Kendra, moved into the next round of the Seventeenth Anananta Chandra Choudhury Memorial Inter-club Prize Money Football Tournament at Chapai near Mangaldai town in Darrang district on Sunday.

According to sources, Moinul Islam, Mahesh Boro and Debojit Boro each scored a goal for the winners, Chapai Yuva Kalyan Kendra.

Earlier, a function was organised on the occasion which was anchored by journalist Ganesh Dutta.

The inaugural programme was also attended by the donor of the trophy of the Anananta Chandra Choudhury Memorial Inter-club Prize Money Football Tournament, Prabhat Narayan Choudhury and other distinguished guests.