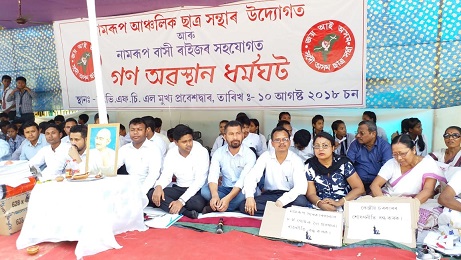 The All Assam Students’ Union (AASU) on Friday dubbed Prime Minister Narendra Modi a liar as he has failed to fulfil the promises he had made during election campaigns ahead of Lok Sabha polls in 2014.

The leaders of the District Committee of the AASU and its Namrup Regional Committee claimed that the PM had promised to the peoples of Assam during 2014 Lok Sabha election that the BVFCL fourth unit would be set up in Namrup of Dibrugarh district if the BJP come to power.

Around more than 5000 people thronged the area where the AASU Regional Committee of Namrup organised a sit-in demonstration in collaboration with the AASU Central Committee. The  sit-in-demonstration was joined by representatives of around 40 organisations in  front of the BVFCL Main Gate.

“We have no option but to agitate to get our voices heard. The setting up of the 4th unit of BVFCL at namrup in Dibrigarh district is very important. In the 100 days agenda of Prime Minister Modi after coming to power, there were immediate completion of the 4th unit of BVFCL, sending back illegal Bangladesh infiltrators from Assam after May 16, 2014. But nothing has happened. All these were fake promises by the Prime Minister,” said AASU central committee general secretary Lurin Jyoti Gogoi.

He also said, “There are 4500 permanent and contractual workers in BVFCL. The first plant was set up in 1969, but it was shut down in 1986. After that, the 2nd and 3rd units were set up in 1976 and 1987 respectively, which have also expired. But credit goes to the employees of the industry who have managed to keep the industry run in a smooth way with an average production of 3.5 lakh metric tonne per year.”

Borah informed that during a meeting in Delhi between a BVFCL team with the Union Fertiliser Minister, the Government did not show any interest in making the 4th unit of BVFCL functional.

“The Government must take positive steps. The 4th unit of fertiliser industry is our property. We will continue to protest until it is made functional by the Government,” said AASU district educational secretary Abani Kumar Gogoi.