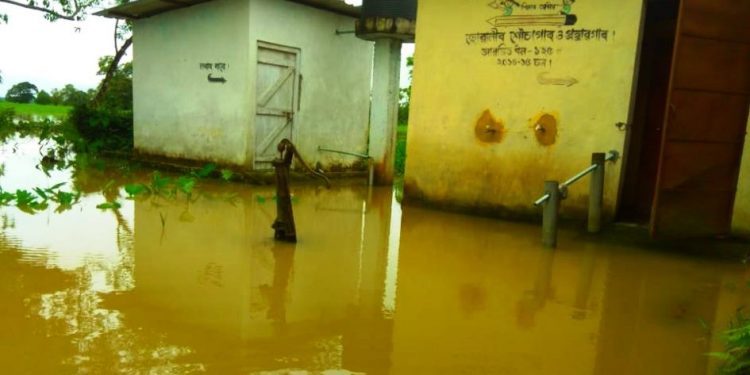 An inundated school in Lakhimpur

Classes in many schools across Lakhimpur district were cancelled on Friday and Thursday as they are still underwater after they were being hit by one of the most devastating floods in recent times.

Flood this year has affected 175 schools in Lakhimpur district, out of which 164 are LP and 11 high schools.

With flood mainly hitting during the summer vacation of the schools, around 50 schools are still underwater when the new session began on Thursday (August 1).

Even though students and teachers did come to the schools, however, no classes could be held as the buildings and desk-benches are still underwater or covered by mud.

And on top of it, major portions of the school buildings are also covered by huge silt deposits.

In Lohit-Khabolu area under Nowboicha Education Block, classes in 22 schools were cancelled on the first day of the new academic session on Thursday.

In Borchola and West Ranaganadi area, 28 schools faced similar problems and cleanliness drive was conducted on the first day.

In Dhakuwakhona sub-division, when students reached their schools after wading through inundated roads, they discovered that the schools are still underwater or covered with silt.

Classes in Madhabdev LP School in Tatibahar area of Narayanpur classes on the first day of the new session were cancelled as the school is still underwater.