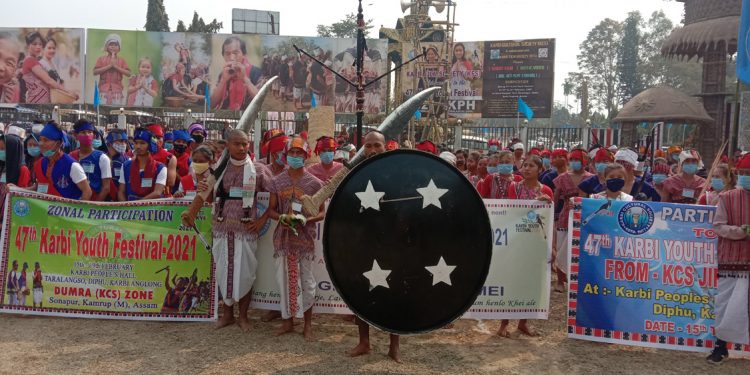 The 47th Karbi Youth Festival began on Tuesday with the traditional procession, Rong Ketong in Diphu in Karbi Anglong district.

Chief executive member of Karbi Anglong Autonomous Council, Tuliram Ronghang inaugurated the festival that has been hosted by the Karbi Cultural Society (KCS).

The venue, Taralangso, Karbi People’s Hall will be hosting one of the largest ethnic cultural extravaganzas in the northeastern.

The venue comprises more than 800 bighas of land, where six natural topographical amphitheatres have been constructed for the programme.

“All people of the district irrespective of their religion, economic disparity, political affiliations and ideology will be celebrating the Karbi Youth Festival,” said Tuliram Ronghang.

“Statehood can be achieved if the Karbi people stand united. However, there should be no violence as in the past,” he said.

He also said that another four zonal KCS camps will be built for the festival next year.

The venue at present has 26 zonal festivals.

KAAC will install CCTV cameras at vital points in Taralangso so that damages are not done to the buildings in the area during the ongoing festival.