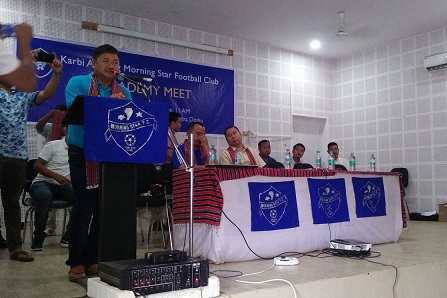 After threadbare discussions among the members and coaches of 21 football academies under the Karbi Anglong Morning Star Football Club (KAMSFC) during an Academy Meet here on Saturday, it was agreed to develop grassroots football by reviving the academies, to produce at least one good player from each academy.

During the meeting, it was also decided to participate in the coming CEM Gold Cup for which a trial camp for senior players will be conducted.

While attending the meet, Chief Executive Member (CEM) of the Karbi Anglong Autonomous Council (KAAC), Tuliram Ronghang on Saturday said he wants to bring a revolution in sports in Karbi Anglong by harnessing the sports potential among the youth.

The meet was held at the Rangsina Sarpo Auditorium, Lorulangso here. KAMSFC called the meeting of all the 21 academies in Karbi Anglong and West Karbi Anglong to have a discussion on development of grassroots football by reviving the academies.

CEM Ronghang said with Diphu Sports Complex of Karbi Anglong Sports Association (KASA) to be ready by November or December this year, the CEM Gold Cup would be hosted.

“It (CEM Gold Cup) will be a mega event as teams from neighbouring Asian countries like Thailand, Singapore, Malaysia, Nepal, Bhutan and Bangladesh will be invited. The local team KAMSFC will participate in the tournament,” he said.

The CEM said, “When I was elected as the president of the KASA, my first thought was to have a good stadium in Diphu and for that I demanded for a special package to build a sports complex in Diphu. The Diphu Sports Complex is coming up at a cost of Rs 45 crore while another Rs 25 crore is being utilised for a football stadium at Donkamukam,” adding, “Rs 10 crore is being used for building an auditorium at Hamren and Rs 8 crore for beautification of river Diphu.”

He said sports should not be politicised. KAMSFC may have members with different political backgrounds, but should be one and untied for promoting the club, he added.

Earlier, chief mentor, KAMSFC, Mizi Kro, briefed about setting up of KAMSFC and the need to develop grassroots football by re-strengthening the academies.

He said that are football clubs in Karbi Anglong but he wants the KAMSFC to make a difference by being a professional football club in the region.

Kro said after winning the State Premier League, there was invitation to participate in the I League-B Division, but due to lack of resources, the club could not move ahead.

“The greatest challenge for us is producing good players. Despite having academies, we have failed to bring up good players. By any means, we have to fulfil the norms and criteria asked for by the All India Football Federation (AIFF) for a professional club, but we don’t have players of our own,” said Kro.

He urged the members and coaches of the academy present in the meeting to make efforts to produce at least one good player from the centre to keep the club move on.

KAAC executive member Ratan Teron also attended the meeting and stressed on the need to develop KAMSFC into a professional football club.