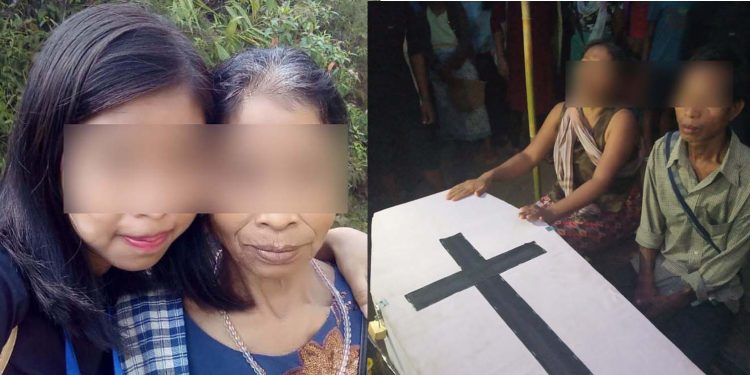 File photo of the victim taking a selfie with her mother during her hay days and (right) the weeping parents of the victim of Dwarbond in Cachar district before her burial. Image credit – Northeast Now

The alleged rape and murder of a 17-year-old student from the Hmar community of Dwarbond area under Dholai constituency created widespread sensation in Assam’s Cachar district on Thursday.

The incident took place on Wednesday evening when Maria Sungte (name changed), just a month away from being 18 years of age was out from her house at 3 PM on foot to teach a kindergarten student at Bum Basti.

She was a 12th standard student of Borjalenga Higher Secondary School.

As she did not return till 6 pm, an alarm was raised by her elder sister as Maria reaches her house each day by 5:30 pm without fail.

The area has neither electricity nor any concrete road.

Her father and uncle along with a few others with mobile phone lights and torches started search only to find Maria’s body lying in a paddy field, more than 2 kilometres away from her house.

She was rushed to Silchar Medical College and Hospital on Wednesday evening only to be declared brought dead by the hospital authorities.

After completion of autopsy on Thursday morning, her body was handed over to her relatives.

The officer-in-charge of Dwarbond Police Investigating Centre, Ram Dular Goala was informed at 8 am on Thursday about the incident.

Northeast Now also reached the spot (Bum Basti), which is 40 kilometres away from the Cachar district headquarters, Silchar.

This correspondent had to travel on foot for more than four kilometres from Bum Basti, as there is no route even for a bicycle to pass by.

A member from the Hmar community, Jacob, who guided this correspondent to the house of the victim said, “Last evening when she was returning from tuition that she takes, some unidentified person, whom we don’t know, allegedly raped her here and threw her in this paddy field.”

He added, “Who did it is the task of the police to find out, but, her body was lying in this paddy field and only the victim’s father took her out from this place and called the relatives for her to be taken to SMCH.”

Upon reaching the victim’s house where preparations were on for her last rites and each and every member from the Hmar community present at that time were waiting anxiously for the media to reach and witness the agony that has swept the family members of the victim.

The elder sister of the victim, speaking to Northeast Now said, “Last evening, I called her up at 5 pm and it rang but she didn’t pick it up.”

“I kept calling her from 5:30 pm onwards but was unable to get in touch with her.”

“After a short while when father arrived at home, I told him that Maria has not yet returned back and then he went out in search of her, only to come back with a bad news,” she added.

Maria was buried just 100 metres away from her house in a burial site and a place flocked by only five families in the vicinity, as informed by the officer-in-charge of Dwarbond Police Investigating Centre, Ram Dular Goala.

The incident of alleged rape and murder took a tacit turn when Northeast Now learnt from investigating officer Goala that even after 24 hours, no FIR was filed by the victim’s family.

Speaking to reporters at his chamber in Dwarbond, RD Goala said, “We cannot say anything until and unless the post-mortem report comes out. Even without an FIR being filed, I reached the spot this morning and did my preliminary investigations.”

Investigating officer Goala added, “We only found a slipper of the right leg in the paddy field and a head band along with a churni. An empty bag was found. We have learnt that her mobile phone has been taken back by her family members.”

“In all likelihood, whoever has done this heinous crime knows the treacherous route leading up to Maria’s house or someone, close to the family members of her, is involved in this crime,” said Goala.