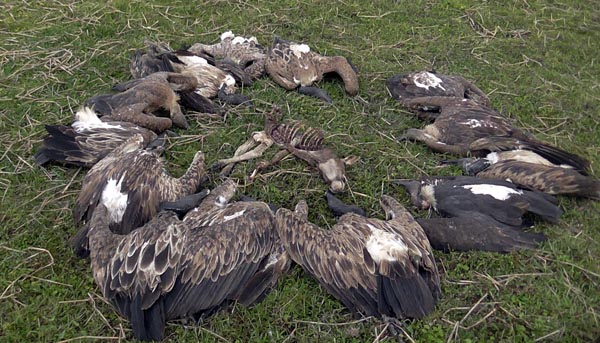 At least ten endangered vultures died in a suspected case of poisoning at Bamunigaon under Chaygaon police station in Assam’s Kamrup district.

The vultures were found dead after eating the carcass of a cow at the site.

Assam forest department has lodged a complaint with Chaygaon police in connection with the incident.

“The exact cause of the death of the vultures is yet to be ascertained. We are waiting for the post-mortem report,” said an official of the Kamrup West Forest Division.

Although forest officials have not been able to detect how the vultures died, the birds had eaten the carcass of a cow at Bamunigaon, and probably died due to poisoning.

“It is unfortunate that such things happen despite awareness campaigns being carried out,” said a local.

The official said one vulture rescued from the site in a critical condition has been sent to Vulture Conservation Breeding Centre at Rani for rehabilitation.

Police said they are investigating the matter and have not yet arrested any criminal involved in the death of the vultures.

“No arrests have been made so far. We are investigating the case,” said a police officer.

Wildlife activists said government agencies have not been able spread awareness in village areas regarding the need to protect vultures in the state as their numbers are dwindling.