In a shocking incident, 18 vultures of a rare species were found poisoned to death in Panidihing Village Panchayat, Demow, Sivsagar district on Saturday.

The incident which happened on Saturday was discovered when some locals spotted several vultures lying on the Udaipur Jamuguri field.

The villagers also found several other vultures fighting to stay alive. They speculated food poisoning being the root cause of the vultures’ death. 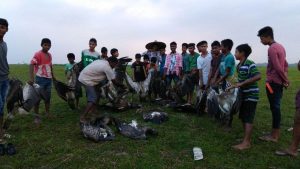 The incident prompted the nature lovers to appeal to the Forest Department to take immediate and necessary action.

A local said, “We have witnessed the carcasses of the vultures spread on the field while we went to get our cattle from the field. There were some other vultures in a painful situation fighting for life.”

Although they tried, the villagers failed to save life of the rest of the poisoned vultures.

The locals also spotted a cow calf  carcass. A local present said, “Probably they (vultures) ate the flesh of the dead calf.”

There was also widespread public outrage at the absence of officials from Demow Forest Division after being informed of the incident by the public.

Manipur & Meghalaya to go for Rajya Sabha polls on June 19