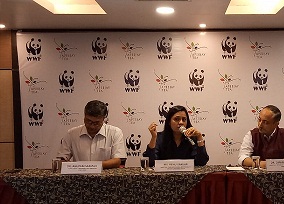 Taking the said problem into consideration, Apeejay Tea Limited in tandem with World Wildlife Fund (WWF India) has found out a way to deal with the growing problem of human-elephant conflict in Assam – installation of low-cost solar power fence and bio fence in the tea garden areas.

Apeejay Tea and WWF-India started the project in 2015 in Sonitpur district of Assam which is referred to as a ‘ground zero for human-elephant conflict’. WWF India Brahmaputra Landscape team leader Anupam Sarmah informed that low-cost solar power fences have been installed in four tea estates – Borjuli, Ghoirallie, Dhulapadung and Sessa tea estates belonging to Apeejay Tea Limited in Sonitpur district.

“The installation of these fences has indeed helped in bringing down the cases of man-elephant conflict which results in huge loss to lives and property,” Anupam further informed. “Instead of electric fencing that people have been using for long time, we have introduced a scalable bio fence using thorny bamboos (read kotoha baah in Assamese) to prevent the entry of wild elephants into vulnerable areas of the tea garden.”

Sarmah also informed that Apeejay Tea Limited and WWF India have been holding village-level meetings, interactions with anti-depredation squad (which comprises villagers as members who are trained to tackle man-animal conflict), orientation and organising street plays across the tea gardens in Sonitpur district of Assam so as to create awareness on how to manage man-elephant conflict.

Highlighting the success of the project in the last three years, Dr Dipankar Ghose, Director of Species and Landscapes, WWF India, said, “Through intensive conflict management strategy in the conflict-prone areas, a range of initiatives have been implemented which were found to be successful in reducing losses related to human-elephant conflict.”

Dipankar informed that eight elephants and 16 persons lost their lives during man-elephant conflict in 2013 while three elephants and 11 persons lost their lives in 2017 in tea gardens of Apeejay Tea Limited in Sonitpur district. Stressing on the need to introduce bio fence in a big way in the tea estates of Assam, Apeejay Surendra Group Director (Corporate Social Responsibility-CSR) Renu Kakkar said, “We are now trying to communicate with the Union Ministry of Environment, Forest and Climate Change on the issue of bio fence and its effectiveness. We are also looking forward to setting up a platform of collaboration between other tea estates of Assam and WWF India would work with these estates in joint collaboration to replicate the said project in the tea plantations of Assam.”

A short educational film Hamara Ghar on peaceful co-existence was screened during the Press conference. Anupam informed that the Assam Forest Department provided all kind of “logistic support” during the implementation of the said project.