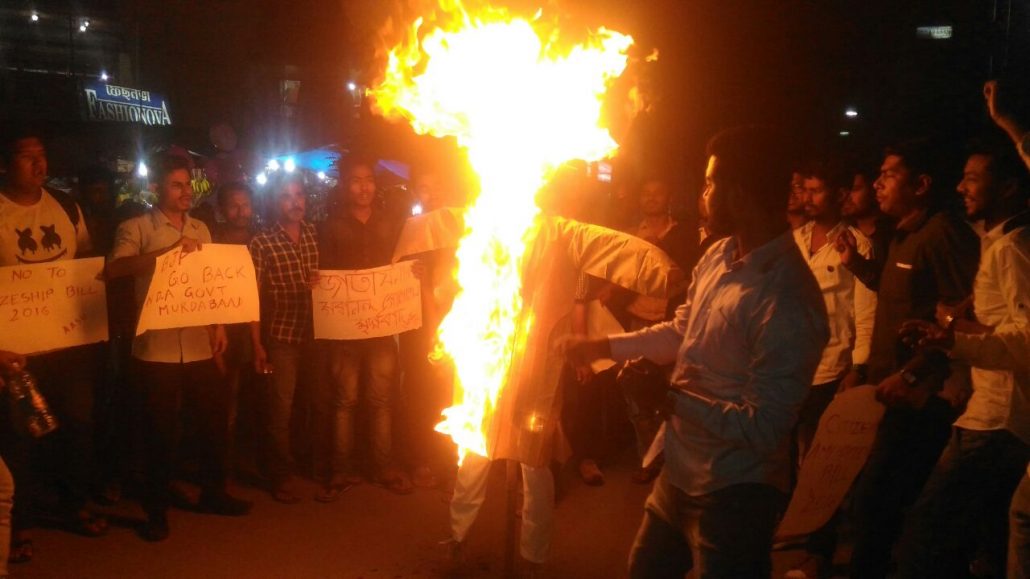 Keeping pace with other organizations those who have been raising their voice against the much discussed Citizenship Bill for drawing attention of the Joint Parliamentary Committee (JPC), Sonitpur chapter of Asom Sahitya Sabha also staged their strong protest against the bill.

In protest against the government’s stand, the members of the Sonitpur district committee of the apex literary body took out a protest rally throughout the town.

The protestors terming the bill as a ‘destroyer of the ethnicity, culture and language of the local indigenous people’, added that no any further burden of foreigners would be accepted.

The protestors later submitted a memorandum to the Deputy Commissioner that was addressed to the JPC.

Meanwhile, several organizations burnt down the effigy of former Congress minister Ardhandu Dey on Wednesday night and demanded immediate arrest of Dey as per law.

On the other hand in an email, the students of Assam enrolled in Aligarh Muslim University, Uttar Pradesh, stated that they carried out a silent protest on the ongoing issue of Citizenship Amendment Bill 2016 and expressed solidarity with the people of Assam.

Students from various departments, research scholars and Faculty members were present and expressed their feelings by saying Assam is not a dumping ground for illegal immigrants.

In the email Shahidul Hoque, Lecturer of Philosophy, AMU further mentioned that everybody should come with a collective and progressive thought to build a peaceful and harmonious Assam.

“We have already so many problems in the state, so we don’t want more burdens on our people. We also request to the present government to take a productive stand and restore normalcy. Let us live together peacefully,” he added.