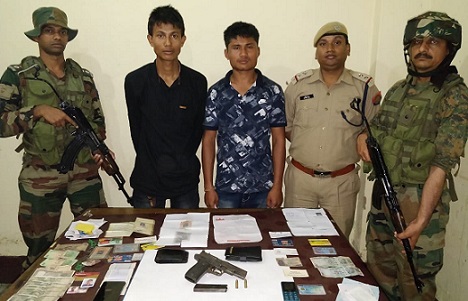 At a time when the region of Upper Assam has been on high alert with insurgent activities like firing incidents taking place and IEDs, weapons, war like stores being recovered, the Maibela Army Camp of DAO Division along with police busted an active network of over-ground ULFA-I workers at Sonari in Charaideo district.

As per information, based on inputs about two active over-ground workers of the United Liberation Front of Asom-Independent (ULFA-I) at Diamond Hotel in Sonari, a Maibela Army Camp team along with police launched a joint operation and apprehended 23-year-old Durlabh Konwar alias Moon, a resident of Mahamara and 28-year-old Niranjan Borgohain alias Nion, a resident of Barahi Gaon.

The joint team was also able to recover one 9 mm pistol, one magazine, two 9 mm live rounds of ammunition and two mobile phones from their possession.

“The apprehended individuals have revealed that they assisted the ULFA-I in collection of extortion and were involved in arms smuggling and fresh recruitment and were also acting on the behest of the hardcore listed cadres of ULFA (I) operating from Nagaland and Myanmar,” informed sources.

Both the over-ground ULFA-I workers have been handed over to Sonari Police.

Defence sources claimed that the apprehension of the two over-ground workers has exposed the active network of ULFA-I in the Upper Assam region.

It may be mentioned that on May 5, 2018, in a joint operation, the Sapekhati-based Army camp under the aegis of the Dao Division along with Sapekhati Police recovered arms and ammunition from the possession of a hardcore cadre of the ULFA-I in Charaideo district.

As per Army sources, during the joint operation, a sophisticated weapon – MQ 81 Assault rifle – along with two magazines and 78 live rounds of ammunition were recovered from the possession of one apprehended hardcore ULFA (I) cadre, who has been identified as Nirmal Khaklari alias  Nirmal Asom from Borahagaon village in Charaideo district.

Army sources revealed that the apprehended cadre was a member of the banned militant outfit ULFA (I) and was involved in the firing incident at Balikhitya Petrol Pump and Kanu Tea Estate on April 23, 2018.