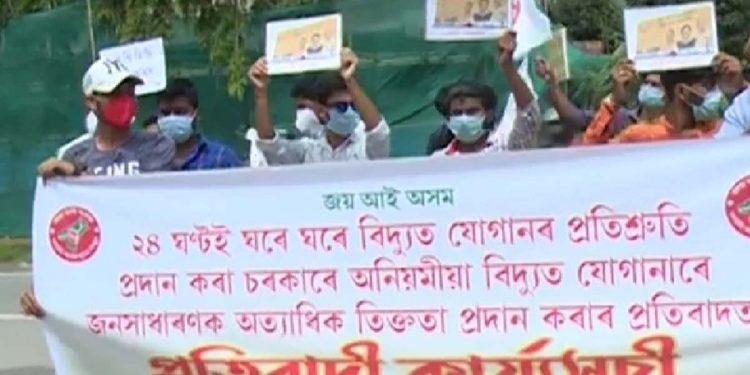 A view of the protest. Image credit - Northeast Now

AASU members burnt the effigy of Assam chief minister Sarbananda Sonowal on Monday in front of the APDCL office at Jorhat in protest against frequent and prolonged power cuts in the district.

The chief minister is in charge of the power department.

The protesters shouted slogans against the Assam government and the chief minister demanding restoration of regular power supply to the consumers.

The protesters slammed the Assam government for the erratic electricity supply to the consumers and pointed out that the BJP on the eve of last Assembly polls had promised 24×7 power supply.

They said people are suffering a lot in view of frequent power cuts during this summer season.

The protesters said at a time when the businessmen, traders, industrial units have been severely hit financially due to lockdown, which has continued for the past five months, the frequent disruptions in electric supply have added to the woes of the people.

The assistant general secretary of the Jorhat district unit of the AASU, Bijoy Shankar Bordoloi and state AASU organising secretary Jul Khound were among those who led the protest.

Later, a delegation of the students’ body submitted a memorandum to the deputy general manager of APDCL establishment in Jorhat seeking uninterrupted power supply to consumers.