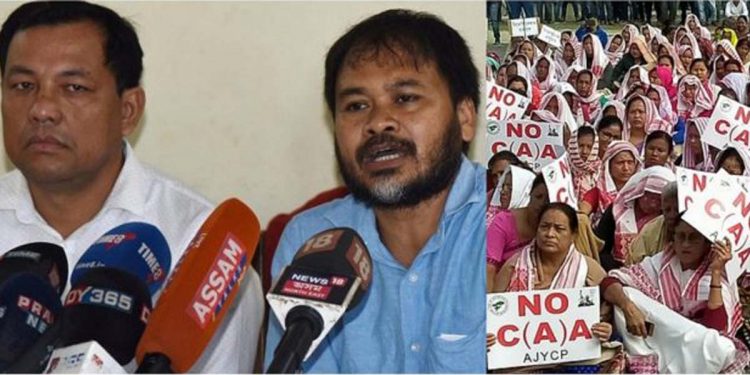 With an aim to defeat the BJP, the 70 anti-CAA groups are gearing up to fight the upcoming 2021 Assam Assembly polls, uniting all the anti-BJP parties and forces.

A top-level leader associated with the 70 anti-Citizenship Amendment Act (CAA) groups on condition of anonymity revealed that they had an important meeting on Sunday in this regard.

“In the meeting, a list of candidates for 16 Assembly constituencies has been prepared,” said sources.

Sources informed that a political party will be formed under the leadership of Krishak Mukti Sangram Samiti (KMSS) adviser Akhil Gogoi, who is still in jail, soon.

According to the sources, Akhil Gogoi would contest from Teok and Sivasagar constituencies while Asom Jatiyatabadi Yuva Chatra Parishad (AJYCP) general secretary Palash Changmai would fight from Sonari constituency, as decided in the meeting.

Rubul Das, the president of Anushushit Jati Yuva Chatra Parishad, which represents the youths and students of the Scheduled Caste community, would fight from the Raha constituency, reserved for SC.

As per the list, the executive president of Tai Ahom Yuva Parishad, Lohit Gogoi, will contest from Mahmora constituency.

Handique has been voicing against the Louis Barger scam for long.

Sources said the list of candidates for the other constituencies would be decided in later phases.

Sources said, “In order to oust the BJP party from power, a political party has been proposed to be formed at the initiative of 70 different groups after a long struggle under the leadership of KMSS adviser Akhil Gogoi. The proposed party has kept all options open for the political party proposed by the AASU, the Ajit Kumar Bhuyan-led Anchalik Gana Manch, and all other anti-BJP political forces.”

Sources said, “In order to cross the electoral bridge, the AGP-BJP force has been misleading the common people. The BJP will be resisted through seat-sharing.”

Activities have already been started in all the district committees of the groups, sources claimed.

Sources said, “Candidates will be fielded in all the 126 constituencies. Talks are on with many like-minded parties in the two hill districts, Bodo-dominated areas, and the Barak valley.”

The leaders of the proposed political party are likely to meet the Election Commission of India in the first week of September.