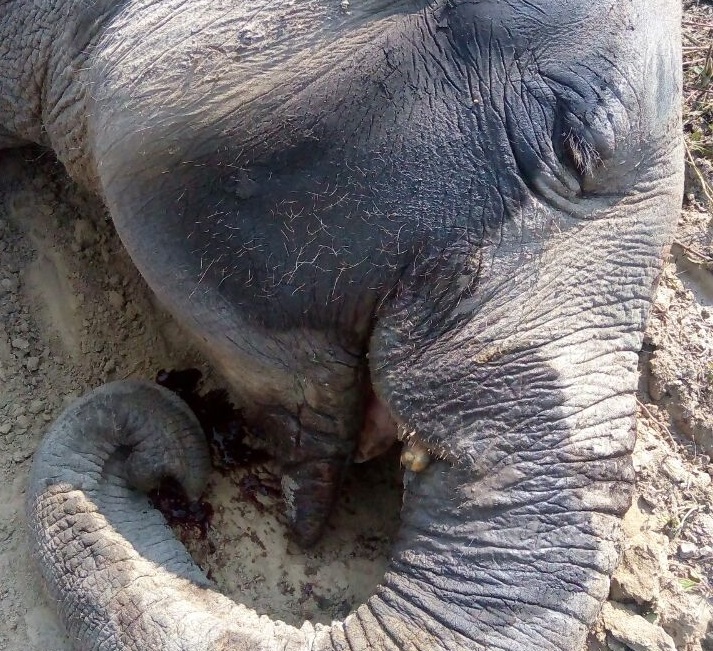 The wild elephant, which was injured during a train collision in Lanka area on Saturday, died at Panbari CWRC on Monday.

A seven-year-old wild elephant, which had received multiple injuries after a passenger train hit it near the Hawaipur Station in the Lanka area under Hojai district on Saturday evening, succumbed to its injuries on Monday.

The elephant died at around 3 pm at the Centre for Wildlife Rescue Conservation at Panbari under Kaziranga National Park.

The animal was undergoing treatment at the Centre for Wildlife Rescue Conservation after it was rescued by the WTI and forest officials of the Kaziranga National Park.

It may be mentioned the seven-year-old elephant was injured while four others of a herd of elephants were killed after being mowed down by the Guwahati-bound Silchar Passenger train near Hawaipur Station on Saturday evening.

The wild elephant was injured in train collision while crossing the railway track near Hawaipur Railway Station.

According to Dr Panjit Basumatary of the CWRC, “The elephant with fractures in trunk, forehead and legs was taken to the wildlife conservation centre on Sunday at 12 noon and the treatment was started.”

Basumatary said, “There was heavy bleeding from the trunk on Monday due to the major injuries. During this stage, there remains always less chances of recovery for any animal.”

After the incident on Saturday evening, the train communication was also disrupted on the Guwahati-Lumding and Lumding-Guwahati routes.

It may be mentioned that three wild elephants of a herd, including two pregnant females, were killed by the speeding Kanyakumari-Dibrugarh Vivek Express when they were crossing the railway track at Hojai in December, 2016.

In December 2017, six elephants including an unborn were mowed down by a speeding train in Sonitpur district of Assam. The incident happened when the Guwahati-Naharlagun Express train hit the elephants at Bamgaon, 10 to 15 KM away from the demarcated elephant corridor, at around 2.20 AM.