Mahapurusha Madhabdeva Foundation observed the death anniversary of Mahatma Gandhi at the spruced up Millennium Park in Jorhat.

School students of Balya Bhawan, Govt Girls’ HS and MP School and 4 Number Ward LP School were invited to the event and told about Gandhi’s contribution as a social worker and freedom fighter.

The students also competed in a speech contest on Gandhi’s childhood.

The cash prizes will be given to them at a public function. 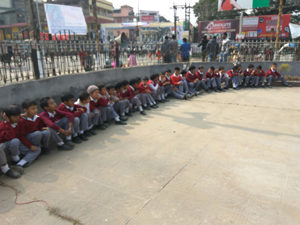 Indrajit Kumar Baruah, Former Joint Secretary, Government of Assam in his speech said, “Knowledge about Gandhi’s contribution to the nation’s freedom and his efforts to bring equality among all sections of people, his love for the harijans was not known to the young generation which was why the schoolchildren had been invited to participate in the shraddhanjali ceremony.

Ratul Baruah, Secretary of the Foundation said that from henceforth their target group would be children as they can be moulded when young.

The Foundation resolved to observe the 150th  birth anniversary  of Mahatma Gandhi by bringing out a publication on great men and women of Assam starting from Chaolung Siu Ka Pha to Bishnu Prasad Rabha.

It would also hold a competition on Patriotic songs among students and plant one lakh saplings.