I have fought against terrorism. Terrorism can never give a meaning to your rights. Education can. Development can. Progress can: Zubeen 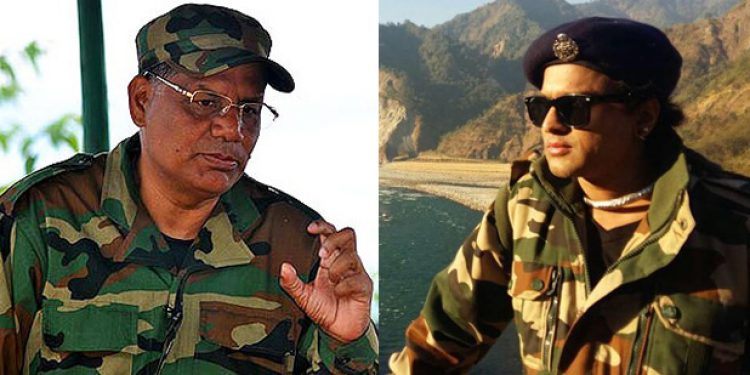 Days after ULFA-I commander-in-chief Paresh Barua claimed responsibility for the grenade blast that took place in front of Guwahati Central, a shopping mall on the R G Baruah Road, singer Zubeen Garg slammed the militant outfit through a long post in Facebook. 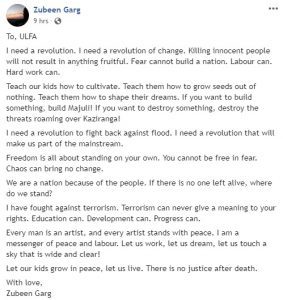 Freedom is all about standing on your own. You cannot be free in fear. Chaos can bring no change.

We are a nation because of the people. If there is no one left alive, where do we stand?

I have fought against terrorism. Terrorism can never give a meaning to your rights. Education can. Development can. Progress can.

Every man is an artist, and every artist stands with peace. I am a messenger of peace and labour. Let us work, let us dream, let us touch a sky that is wide and clear!

Let our kids grow in peace, let us live. There is no justice after death.

The singer openly condemned ULFA through his post on Facebook. By asking the millitant outfit to stop all activities of terrorism, Zubeen advised them to shape the dreams of the future people of the state through education and development.

He also advised ULFA to stop bloodshed by killing innocent people of the state and suggested that they can fight to destroy the threats roaming over Kaziranga.

Zubeen also urged ULFA that if they had the wish to build something, they can build Majuli.

He also advised them to bring a solution to fight against the problems of flood in Assam.

As a messenger of peace, he also asked ULFA to imagine a nation that is devoid of people.

He also told ULFA that every person wants peace and they can bring change only through education and not by creating fear among people through their activities of terrorism.

It may be mentioned that police have already arrested Jahnabi Saikia, a little known TV actor along with her associate, pro-talk ULFA leader Pranamoy Rajguru from a rented house in city’s Panjabari area in connection with the grenade blast in Guwahati.

Police officials said based on their confession, police have also arrested three other persons in connection with the blast.

Former ULFA rebel Amit, who according to police is a bomb expert, was arrested from Golaghat while Chinmoy and Indra were apprehended from Guwahati and Nagaon respectively.

According to police, Chinmoy, a resident of city’s Christianbasti area, joined ULFA (I) few months back and Indra worked as linkman of the outfit.