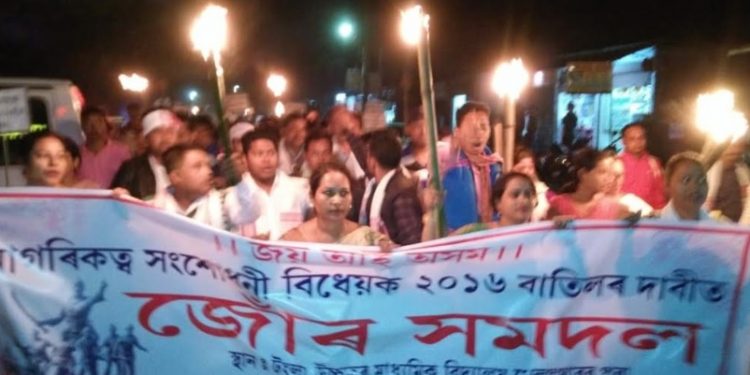 Udalguri district of Assam also joined in the state-wide protest against the controversial Citizenship (Amendment) Bill, 2016.

A massive torchlight rally was taken out at Tangla in Udalguri district in protest against the citizenship bill.

The bill  is aimed to amend the Citizenship Act 1955 and grant citizenship to the religious minority communities of Afghanistan, Pakistan and Bangladesh.

Thousands of people spontaneously participated in the procession which started from Tangla H S playground and passed through the main thoroughfares of the town via Tangla Tinali which culminated at Kukurakata area.

While talking to the media, joint secretary of KMSS Udalguri district unit, Pankaj Asomiya said that the bill is an attempt to destroy the identity of the indigenous people of the State.

“It is a threat to our state and region. We oppose the bill tooth and nail and the Centre should look into the matter immediately,” he said.

He also slammed State Chief Minister, Sarbananda Sonowal terming him not a hero(nayak) but a villain (khalnayak) of the Assamese people.

“The present attempt of the Central government to extend citizenship beyond the cut-off date of March 24, 1971 is not acceptable because the state of Assam is already overburdened with huge influx of foreign nationals from Bangladesh causing serious economic, social stress and identity crisis posing threat to the existence of indigenous communities of Assam,” he added.