Assam: Two brothers arrested with heroin from Harmutty in Lakhimpur 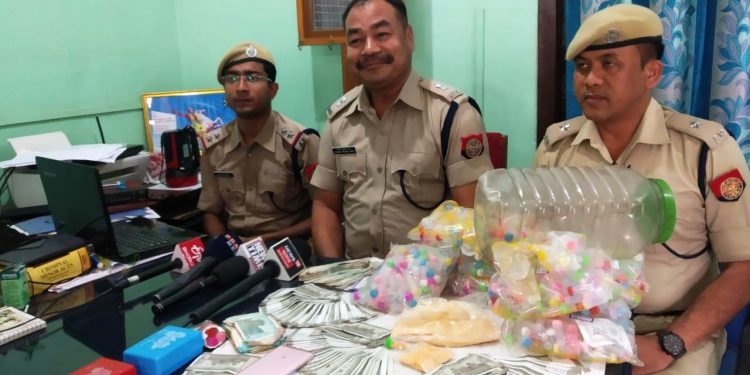 Two suspected drug peddlers were arrested at Lakhimpur’s Harmutty area on Thursday night along with heroin.

Police recovered 9.70 gm heroin, huge amount of finger-sized plastic containers suspected to be used in carrying the banned substances and a cash amount of Rs. 2.5 lakh from their possession.

The arrests were made on the basis of the statement of one 22-year-old Bhagyajeet Pegu, a drug user, who was spotted by some members of student organizations buying drugs from a car in Bantow area of North Lakhimpur town.

This led to the discovery of a drug peddling network run by one Nipon Das of KB Road area of North Lakhimpur.

It may be recalled that North Lakhimpur and its outskirts have become a den of banned substances since quite a long time.

Last year, the death of a 24-year-old youth at North Lakhimpur was attributed to the growing menace of substance abuse, as confessed by two persons arrested in connection with the case.

The victim, Priyangshu Madhukalya, was found in a precarious condition at Chaboti area on the evening of April 16, 2018 after he was picked up by two of his friends from his residence in Ward No. 8 of the town.

He died on his way to Guwahati for advanced treatment.

Based on complaints by the victim’s family, police had arrested two of his friends, who reportedly confessed to giving a high dose of drugs to Priyangshu, which led to his fatal condition.

The tragedy, which came as a shocking reminder of the rampant use of drugs among a section of the youth irrespective of gender in and around North Lakhimpur, has still been lingering in the town.

Areas near colleges and private hostels, bridges and deserted streets, the under-construction National Highway-15 bypass, offices and other public places with no power connection have long been favourite joints for such activities where youths in groups ‘indulge’ till late in the night.

Substances like cannabis and ganja are rampantly used by these revellers in these dens every day.

Roadside kiosks and paan shops in many pockets of the town do brisk business by covertly selling these substances which are codenamed ‘baba’ and ‘weed’.

These activities have gone unchecked over a couple of years, thereby accentuating the death of two young persons in less than one year.

In September, 2017, a college student, named Imran Ahmed, was murdered by two of his seniors allegedly for the former’s refusal to cough up ‘extortions’ to purchase drugs.

Not strangely enough, the case still remains ‘unsolved’ despite arrest of the accused.

This ever-growing phenomenon of drug abuse among the youths in North Lakhimpur has obviously led to a spurt in the district’s crime graph, a section of socially conscious senior citizens here rued.