The tribal organisations have appealed to Rajya Sabha MP from Assam, Biswajit Daimari, to stall the ST 2019 bill in the Upper House of Parliament as defective bill 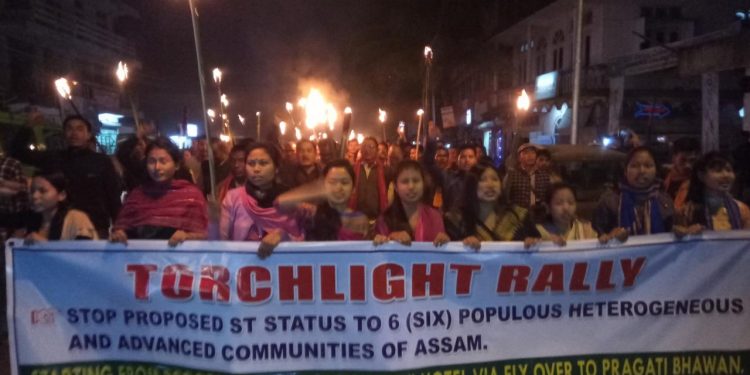 Several tribal organizations in the state took out a torchlight rally in Kokrajhar under the aegis of Coordination Committee of the Tribal Organisations of Assam (CCTOA) against the state and central government move to grant Scheduled Tribe (ST) status to six populous and advanced communities of Assam.

The tribal organisations demanded  withdrawal of ‘The Constitution (Scheduled Tribes’ Order (Amendment) Bill 2019’ from Rajya Sabha in order to safeguard the constitutional rights of Scheduled Tribes of Assam in particular and India in general.

It also demands that instead of granting ST status to six OBC communities, they should be provided with appropriate and adequate governmental support within their own reservation quota.

The tribal organisations opined that the original and existing 14 scheduled tribes will not have representation in the panchayati raj institutions, urban bodies, municipalities, state assembly and in Indian Parliament if the six advanced and populous communities are given the ST status.

“Do not allow to make non-STs to become STs only for political purpose at the cost of existing minority STs as it is your duty and responsibility to give protection to existing ST whom you  represent,” the tribal bodies called upon the Rajya Sabha MP.