It has come to notice that Assam Transport Department has started levying fine renewal of Motor Vehicle Tax.

A lot of owners of goods carriers, mainly trucks, could not make the payment for Motor Vehicle Tax before March 31 because lockdown was announced from March 24.

Subsequently, Piyush Jain, Director (MVC) of the Ministry of Road Transport and Highway on March 30, had issued a circular to all the states and union territories.

The circular had clearly mentioned that validity of all documents related to Motor Vehicles Act 1988 and Central Motor Vehicles Rules 1989, would be extended up to June 30 because of COVID19 pandemic.

The notification had said validity of all documents which had expired since February 1, would expire by June 30, and all documents would be “treated to be valid” till June 30.

But, officials at the Assam Transport Department refused to accept the notification by Ministry of Road Transport and Highway on extension of validity, and have started levying fines.

“This is quite surprising that Assam Transport Department officials refused to follow the Ministry of Road Transport and Highway notification,” an employee of G B Chowdhury Holding Pvt Ltd told Northeast Now. 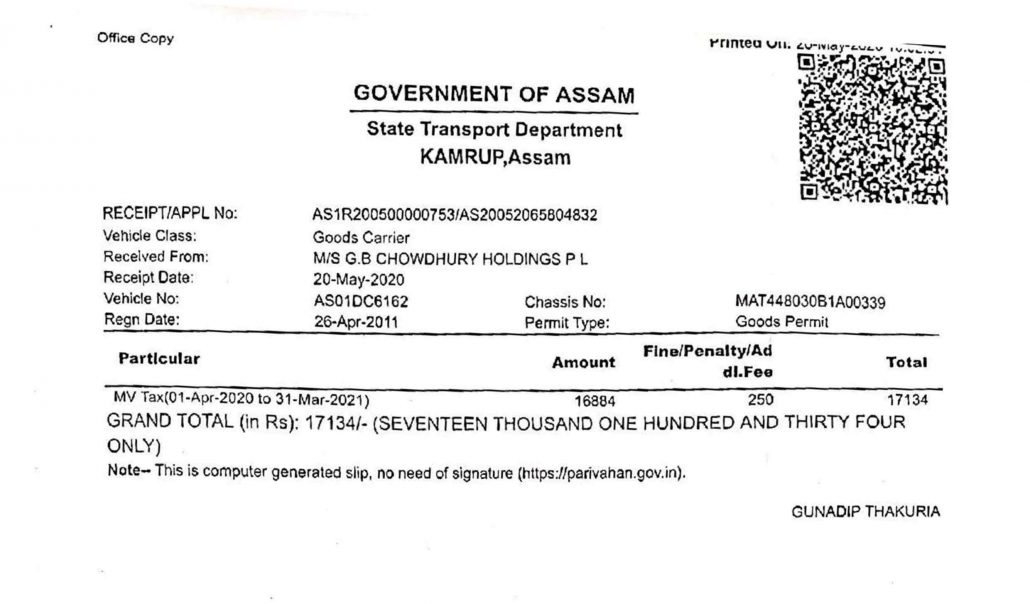 The employee of the company said he was left with no other option but to pay the fine as the Transport Department staff insisted that it was mandatory to pay the penalty.

“How can anyone pay MV Tax when Transport Department offices were closed amid lockdown?” the employee said.

Despite repeated attempts, Arun Bora, District Transport Officer (Enforcement) in Guwahati could not be contacted as he did not receive his mobile phone.

Similarly, Commissioner of Transport of Assam, A P Tiwarai, also did not receive any calls.