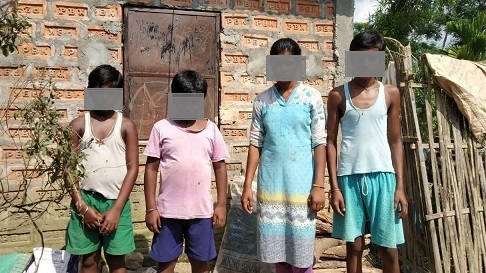 The children of Dinesh Prajapati and Sarita Prajapati of Tinsukia. Image - Northeast Now

Nyay Manch Sabka, an social organization on Saturday submitted a memorandum to Prime Minister Narendra Modi through the Deputy Commissioner of Tinsukia regarding the D-voter (Doubtful voter) tag on the family of one Dinesh Prajapati.

Forty-five-year-old Dinesh Prajapati and his wife, forty-year-old Sarita Prajapati of Tinsukia were arrested and sent to the detention camp on May 15, 2018 in connection with an warrant of arrest issued by the Foreigners’ Tribunal. Dinesh Prajapati’s mother, 72-year-old Chotki Devi suddenly died on August 15, 2018.

Budhi Nath Prajapati, central president of Nyay Manch Sabka, said, “After her son and daughter-in-law were sent to the detention camp, Chotki Devi was looking after their children. The family is poor and Dinesh is the only bread-earner in the family. It was very difficult for Chotki Devi to run the family because of their poor financial condition and on August 15, she suddenly died due to cardiac arrest. She had been starving for many days and worried about the future of their children.”

“Dinesh’s forefathers were from Uttar Pradesh’s Ballia district, who had come to Assam in 1945 and from then they are living in Tinsuki’s Pokhurijan area,” said Budhi Nath Prajapati.

Dinesh used to run his family by selling vegetables and his whole family depended on his earning.

“It’s a gross human right violation on Prajapati’s family, because the family is poor and not having proper document to prove Indian citizenship. The Foreigners’ Tribunal issued a warrant on May 15 and sent the husband-wife duo to the detention camp. They are poor and illiterate people having no knowledge about documents. On 2002, they appeared before the Foreigners Tribunal in Dibrugarh for hearing and suddenly after 14 years, a warrant was issued against them and they were sent to the detention camp,” said Budhi Nath Prajapati.

He alleged, “They voted in the last Assembly election and suddenly they were branded as doubtful voters. It seems that the Government machinery has failed miserably and has been harassing genuine citizens as doubtful voters,”

Budhi Nath Prajapati demanded that Dinesh Prajapati and his wife Sarita Prajapati be released immediately and be provided proper compensation.

“The process/ procedure of Foreigners’ Tribunal is erroneous and hence it needs to be amended accordingly so that not a single Indian citizen is harassed. The Indian people, who come from different States of India to Assam and settled here, their names should be included in the NRC,” Budhi Nath Prajapati added.

He further said, “The demand of any document from Indians, who came to Assam from other States of India by the NRC authority, should be waived. It is very much difficult to maintain and obtain document by the poor Indian citizens, who are living in inhabitable condition as most of their time pass in managing food.”