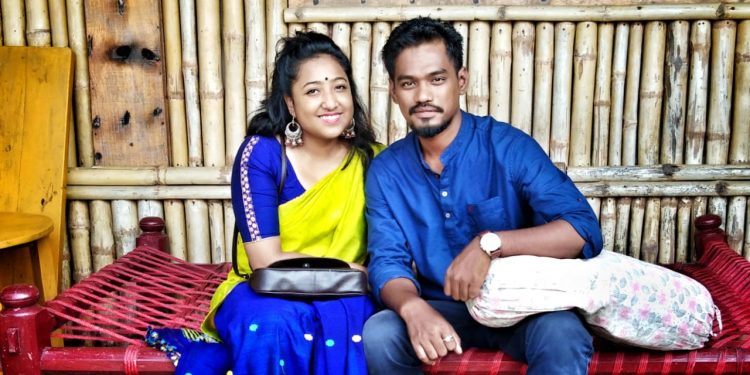 Dipjyoti Das, poet and artiste in Assam’s Tezpur, has strong feelings when it comes to corruption of culture.

In order to counter the growing trend of jingles which pass for Assamese songs in today’s age, Dipjyoti floated Aabir, along with Jitumoni Kalita and other like minded people.

“I would not like to criticize the present trend in which Assamese songs have lines like washing powder Nirma and top the charts, but all said and done these have all the elements of a jingle which is why they are lapped up and hummed especially by the youth,” he said.

Aabir was floated in 2011-12 but has become more active in the past year or two. The organization conducts workshops in drama, mime, poetry and the likes especially among the young school kids.

“I am trying to instil the quintessence of Assamese culture in children in the hope that they remain true to the ethos of our state,” he said.

Their first venture was Theatre In Education Festival, a three day fest which covered the staging of plays and other aspects of drama in which they collaborated with Angik, an organization set up by Sonit Jyoti Saikia, who was an alumnus of National School of Drama, Tripura wing of Theatre in Education.

At present Dipjyoti and Jitumoni are mulling a workshop for children in mime and drama in association with National School of Drama.

Last year, the group had been involved in the performance of ‘O Phul, O Phul nuphulo kio’ in Jorhat and other places, the script of which was written by Pankaj Jyoti Bhuyan.

Aabir had also attempted to teach lessons and poems through the medium of dramatic representation among school children in Tezpur.

“We got a very good response and the children even today say that they recall poems which they had learnt in that manner,” Dipjyoti  said.

Dipjyoti ‘s creativity comes to the fore in the Assamese poems he has composed, some on relevant social issues  and challenges faced by women like Bolotkaar (rape), Pokhila (Butterfly) and Abodho Pokhi (captive bird).

A few of them have been uploaded in YouTube, his fiancee Ruby Gogol doing the recital.

“While studying in Gauhati University I had written a few songs but these are yet to be put to music and are stashed inside my cupboard, ”  he said.

“The lyrics of my songs are nothing like the songs of today and I would like to find a singer who would like to sing them, of course after taking a look at the content,”  he further said.