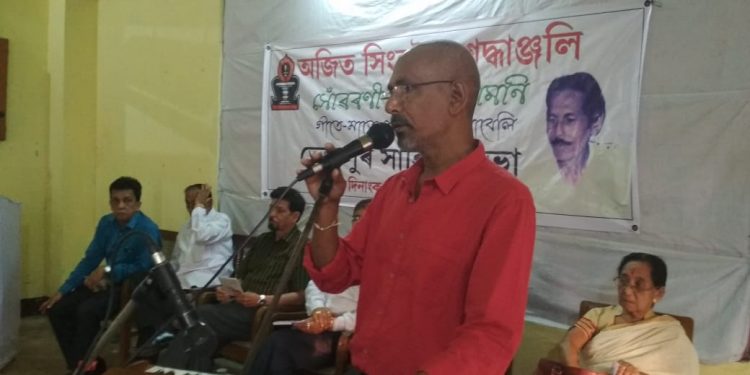 Giving the key note on the brief function christened as ‘Xuoroni-Nidibi Amoni, Geetey-Matey Ati Bohagi Abeli’ to keep the memory and unmatched contribution of the noted artiste towards Assamese cine world and the cultural field of the region alive noted litterateur Hemanta Baruah gave an outline of late Ajit Sinha’s life and spoke on how the noted artiste was vocal in keeping Tezpur vibrated as a culturally rich city in the region.

It is to be mentioned here that late Ajit Sinha who left for his heavenly abode over a decade back during his lifetime played an incredible role in the podium of culture of the region.

Besides this he played a major role in giving a new dimension to the Assamese films including giving music direction to the movies like Bhaity, Duronir Rong, Ganesh, Banxadhar etc.

Paying rich tribute to the artiste MLA Brindban Goswami in his speech said that late Sinha was a good poet, music composer and singer who reflected the identity of historically important place Tezpur town through the Assamese music.

Earlier deputy Commissioner, Narshing Powar remembering the artiste said that Assamese culture and heritage has an exceptional and strong hold in the Indian music. He also urged the people involved in the cultural field to work more on the cultural field.

The event was conducted by journalist Pankaj Baruah and secretary of Tezpur Sahitya Sabha Deba Brata Sarma gave welcome speech. A chorus by the members of the Tezpur Sahitya Sabha, Ajit Sinha composed songs presented by singers respectively Anwesa Kanchan Bora and Kamaikhya Bora mesmerized all present in the programme.