In the discussion that lasted for about 40 minutes with the Home Minister, the movement group placed for the early solution of Bodoland issue, inclusion of the Bodos of Karbi Anglog in to ST (Hills) and land and political right to the Bodos living outside the proposed Bodoland area. 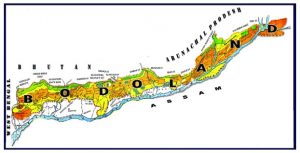 He had given a positive note to take up the matter for solution and continue the talk in frequent manner.

The movement organizations expressed their gratefulness towards convening the tripartite talk after a long gap of more than a year.

The movement groups also expressed confidence that a solution will be arrived at through negotiation.