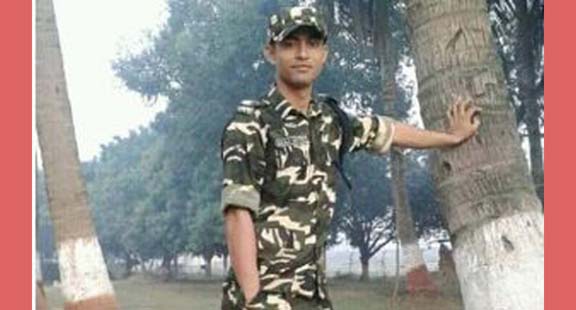 A Sashastra Seema Bal (SSB) jawan from Assam’s Biswanath district has lost his life during Maoist attack at Kathalia village in Jharkhand’s Dumka district on Sunday.

The SSB jawan, who was killed in the Maoist attack, in which four other soldiers were seriously injured, has been identified as Niraj Chetri.

Chetri is a resident of Kauri Pathar village in Gohpur under Biswanath district.

The incident took place in the morning on Sunday.

According to information, SSB jawan Niraj Chetri joined the 35 battalion of the Sashastra Seema Bal in 2014.

As per defence sources, an fiernce gunbattle took place in between the jawans of the 35 battalion of SSB and Maoists in Kathalia village under Dumka district of Jharkhand resulting in the death of Chetri and injury to four other SSB jawans.

The brave hero from Assam is the son of Tika Bahadur Chetri and Ganga Maya Devi.

The news of untimely loss of a brave hero fighting against militants has cast a pall of gloom in the entire region.

The family members and people of the Gohpur area expect an early arrangement by the authorities concerned for sending the body of the jawan to his native village.

While Rai was airlifted to Ranchi for treatment, the other three jawans have been taken to a government hospital in Dumka.