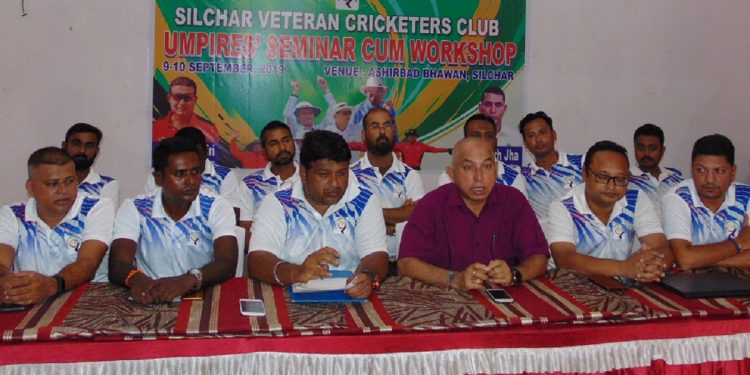 Disclosing this at a press conference, president of SVCC, Bijendra Prasad Singh, said, “With the help of president of District Sports Association of Silchar, Babul Hore, we have been able to rope in two high class BCCI panelist umpires.”

“One is from West Bengal, Satrajit Lahiri, and the other from Jharkhand – Somnath Jha,” he added.

Bijendra Singh also said, “Both these umpires have been officiating for BCCI in elite as well as plate group of Ranji matches, apart from doing their umpiring for BCCI’s Vijay Hazare and Syed Mustaq Ali trophies, for more than a decade.”

“Somnath Jha too, apart from representing Bihar for the Ranji trophy matches, was a state level coach for the Under-17 and Under-23 cricket squads for Jharkhand,” Das also said.

“We cannot ask for more and are anxiously waiting to avail their technical know-how and services,” added Das.

“We would bear all the expenses for accommodation and food for the outstation umpires,” he added.

Babul Hore, president, DSA, Silchar, the man who made all the necessary arrangements while speaking to Northeast Now, said, “We had a similar seminar for umpires way back in 2007 in Silchar.”

“A grand attempt by SVCC to hold such a magnanimous event is always laudable for which have contributed my part,” he added.