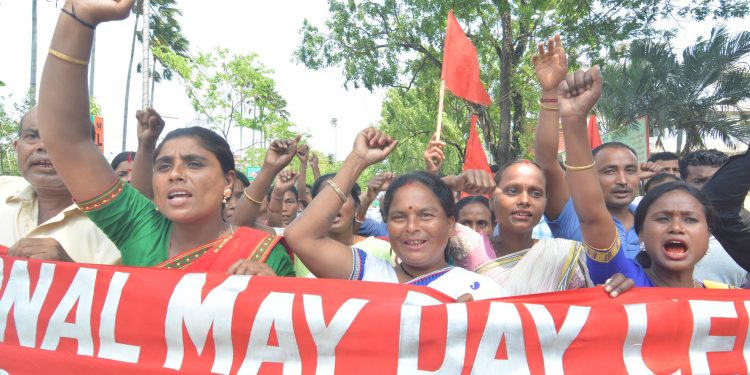 A rally in Guwahati on May Day. Image: UB Photos

The International Labour Day popularly called as May Day was observed in Guwahati on Wednesday under the aeigis of Journalist Association of Assam (JAA).

Addressing the open session of the day, JAA president and veteran journalist Dhirendranath Chakraborty extended heartfelt greetings to all the journalists and workers of media houses and appealed to the journalist fraternity to lead the movement unitedly for the freedom of Press.

The open meeting was presided over by its working president Anup Biswas.

Speaking on the occasion, JAA general secretary Dalim Phukan said that media workers and scribes are facing serious challenges in discharging their duties. He said that atrocities and attack on journalists are on the rise in Assam and journalists must unitedly fight against the undemocratic forces who gag the Press.

Bhupen Goswami, national vice president of NUJI, expressed serious concern over the rise of crime against journalists in the State and demanded the government to introduce the Journalist Protection Act in the State.

“The Act will ensure the safety and security of the scribes,” he said.

The meeting also discussed several issues pertaining to the welfare of journalists of the State and resolved to raise the issues with the government to ensure the safety and security of the media persons.