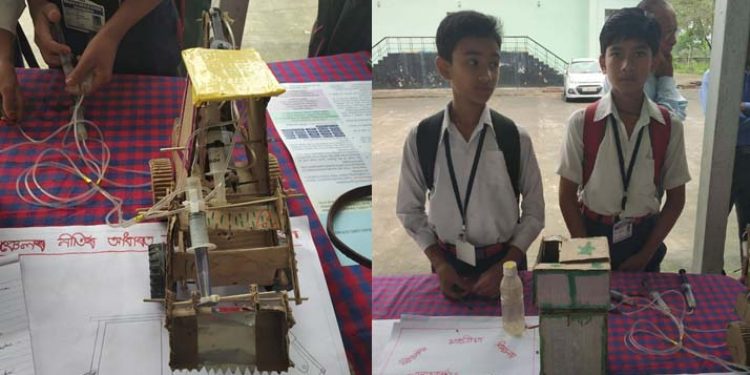 A view of the exhibition in Jorhat. Image - Northeast Now

The innovative models presented by school children drew attention of all at the science model exhibition-cum-competition organized in Rain Forest Research Institute in Jorhat’s Sotai on Saturday.

The event was organised by the  Assam Science Society, Jorhat branch; Assam Academic Centre, Jorhat  Environment Forum in collaboration with RFRI  on the occasion of National Science Day.

The first prize was won by Class 10 students Gautam Jyoti Dutta and Hirokjyoti Bora of Debakanta Baruah Public High School for an air cleaner to be installed near brick kilns which separated the dust particles from the air and sent out purified air from the contraption.

The second prize was bagged by Class 10 students Jaiba Tabassum and Debajani Bhattacharyya of Holy Flower Senior Secondary School for an all in one portable breathalyzer, smoke detector, gas leakage detector and measuring of temperature and humidity.

The third prize went to Pragya Kaushik, Tonmoyee Saikia, Henrietta Kangaroo, all of Class 5 and Tanvi Kashyap of Class 7 from Carmel School for an electromagnetic crane which separated iron pieces from other wastes and could be recycled.

The consolation prize went to Class 7 and 8 students for several innovations like a vegetable cutter, a hydropowered JCB, a home piggy bank with a coded locking system which could be camouflaged as a decorative item.

The cash prizes for the top three entries were sponsored by Girijananda Chowdhury Institute of Management and Technology (GIMT).

The prizes for the quiz competition held on the occasion were sponsored by RFRI.

One of the other interesting models was a converter which stores wind, water and solar energy made by Anurag Tamuly and Amrit Jyoti Duarah of Shishu Bharati English Medium High School, Dergaon in Golaghat district.

Other items were an automated smart dustbin, hydraulic and electrical dumper and a mini Tesla coil which can light a bulb without wires.

RC Boruah, president, Assam Science Society, Jorhat Chapter said it was heartening to see that majority of schools were from the rural and semi-urban areas.

JB College principal Reeta Sarmah in her speech as the guest of honour said parents should be the first to observe whether the child is interested in science or other things.

The director of RFRI, RSC Jayaraj presented the National Technology Day lecture as the chief guest in which he traced the important scientific discoveries over the centuries.

Paran Baruah, president of Jorhat Environment Forum and Bichitra Borthakur,  president, Assam Academic Centre, also delivered speeches on the importance of building scientific temper and an environment to nurture science talent and use of traditional knowledge.