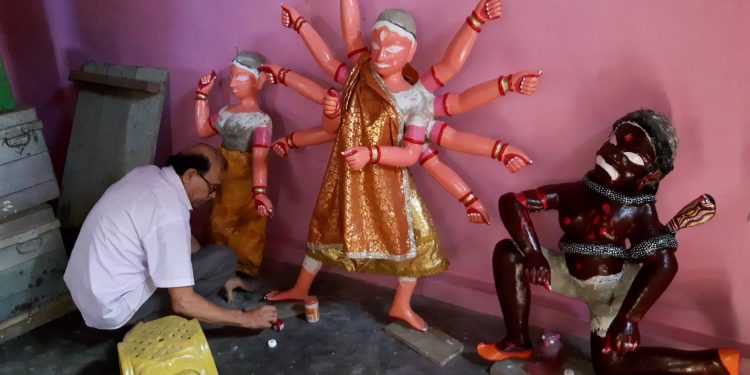 With Durga Puja knocking at the door, the whole of Assam is getting ready to indulge in the upcoming festivities.

The inhabitants of Puranigudam area in Nagaon district are no exception.

Preparations are in full swing for making the traditional wooden idol of Goddess Durga at Puranigudam Sarbajanin Puja Mandap.

It was first started way back in 1901 by a person named Lekhadhar Sarma alias Lerela Khanikar.

Khanikar started the tradition of making a wooden idol of Goddess Durga from the wood of a Bel tree located in his garden and then decorating it with colours 118 years ago.

His tradition has now been continued from the past 32 years by his great grandson Jogen Sarma.

Apart from decorating the traditional wooden idol of Goddess Durga with colours, it is more beautified with ornaments and dresses that are provided by the masses.

It may be mentioned that Khanikar became overcome with grief after the idol of Goddess Durga was immersed in the Kolong river on Dashami annually after the celebration of Durga Puja first started in Puranigudam in 1885.

In order to lessen his grief, Khanikar started making idols of Goddess Durga and other gods and goddesses like Lord Ganesha, Lord Kartikeya, Goddess Saraswati and Goddess Lakshmi from the wood of the Bel tree located in his garden.

However, Khanikar could not make the idol of the demon Mahisasur due to shortage of wood.

The surprising fact is that the artisan who dreamed one night that a piece of wood came floating along the Kolong river.

He found his dream turned out to be true while venturing out into the river bank the next morning.

The miraculous wood led him to complete the making the idol of Mahisasura.

After that the tradition of making wooden idols of Goddess Durga at Puranigudam Sarbajanin Puja Mandap started from 1901.

This year, 12 artisans are employed in making the traditional wooden idol of Goddess Durga in Puranigudam.

They are hoping that all the preparations will be completed smoothly ahead of Sasthi which falls on October 4 next.