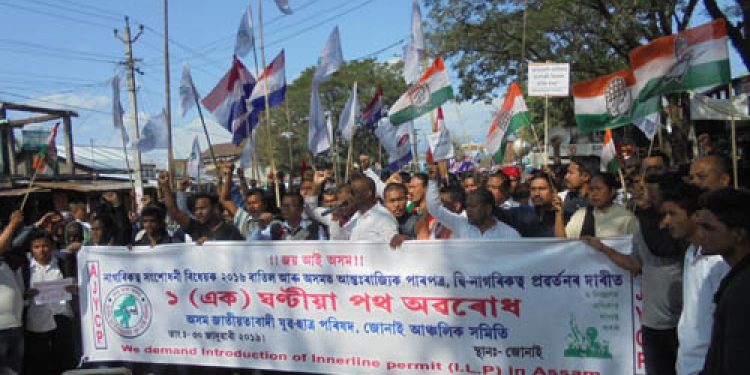 The youths’ organization on Monday launched its ‘Mass Signature Campaign’ at Jonai town in support of their demands. It has blocked National Highway-15 at Jonai on Wednesday to press for the demands and demanding withdrawal of the contentious Citizenship Bill.

The blockade was supported by Jonai block Congress Committee, Asom Gana Parishad and other local organizations.

The organization also announced to resort rail blockade at different portions along Rangiya-Murkongselek BG railway in Dhemaji district on February 7.

Addressing the gathering on the blockade spot at Jonai today, AJYCP central executive member Ratul Borgohain said the AJYCP has been agitating for introduction of Inner Line Permit (ILP) and dual citizenship in Assam for the last 40 years, but successive state governments are ignoring the genuine demand.

“The prevailing situation in the state has made our demands more relevant,” Borgohain said.