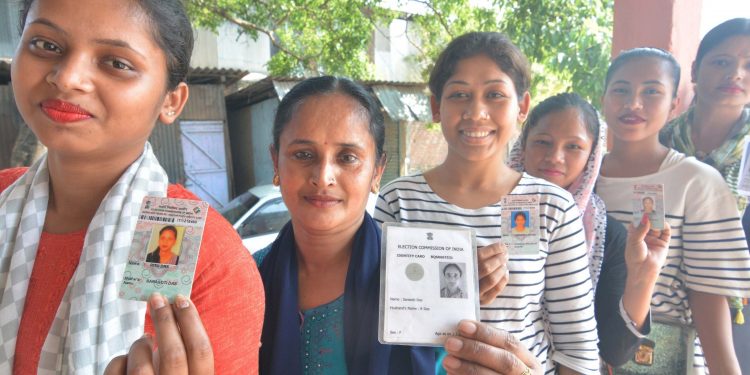 Polling for the second phase of parliamentary elections in Assam began at 8992 polling stations in the five Lok Sabha constituencies of Karimganj (SC), Silchar, Autonomous Districts (ST), Mangoldoi and Nowgong at 7 am on Thursday.

As many as 35968 polling personnel have been deployed for smooth conduct of the polls under phase II of the on-going parliamentary elections in the State.

The number of security personnel deployed in the second phase of polling includes 169 companies and one platoon of central armed forces, apart from deploying minimum of one constable in every polling station.

There are six general observers across the five constituencies where polling is being held in the second phase on Thursday, while there are five expenditure observers and three police observers apart from 544 micro observers.

The total numbers of EVMs and VVPATs to be used for Phase II are 8992 sets in the five constituencies.

There are as many as 137 all-women polling stations for the second phase polling; that includes 11 in Karimganj, 10 in Silchar, 23 in Autonomous Districts, 67 in Mangaldoi and 26 in Nowgong.

There are 84 model polling stations in the five constituencies of the phase II polling.

These include 25 in Karimganj, 10 each in Silchar and Autonomous Districts, 20 in Mangaldoi and 19 in Nowgong.

There are 50 candidates in the fray for the second phase of polling, voting of which began at 7 am on Thursday.

Karimganj has the highest number of 14 candidates followed by 13 in Sichar, 11 in Mangaldoi, seven in Nowgong and five in Autonomous Districts (ST).

There are as many as 1033 remote polling station in Phase II that include 350 in Karimganj, 410 in Silchar, 43 in Mangaldoi and 230 in Autonomous Districts (ST).

However, reports reaching hear from Diphu has stated that voting is yet to start at polling station No 159 Rongkimi English Medium LP School, Left Wing at Diphu in Karbi Anglong.