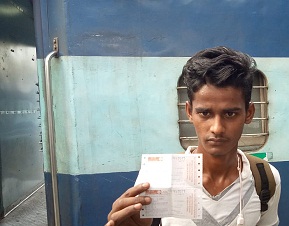 Mazibul Ali, a resident of Barpeta, who was one among the 1,600 passengers, alleged that though the Assam Government had made tall claims that all help would be rendered to the people from Assam coming on the train back from Kerala, they (read Mazibul and his friends) did not receive any help.

“We even bought the train tickets by spending our own money and the Travelling Ticket Examiner (TTE) charged Rs 1,200 to those passengers who were travelling without tickets,” fumed Mazibul.

Mazibul further stated, “We did not know that the train on which we were travelling had specially been sent by the Assam Government to Kerala to fetch people from the State. We bought tickets like fools and even the TTE took fine from ticketless travellers.”

Recalling the flood fury in Kerala, he said, “It was a horrific experience. We (Mazibul and his friends) saw our room filled-to-the-brim with water. We somehow managed to come out of that horrific situation. I was sure that we would meet our watery grave in the room itself. We will not go back to Kerala anymore.”

Mazibul said that he along with his friends spent two nights at Ernakulam Railway Station without any food before leaving for Guwahati on August 19 last.  “We have not received any free food or any other relief materials during the whole journey period,” he remarked.

Ilias Ali, a resident of Chamata in Nalbari district, said that “people stayed in the Railway Station without food for days together”.

On the other hand, the Centre of Indian Trade Unions (CITU) distributed biscuits, bananas and drinking water bottles among the people who arrived from Kerala at the Guwahati Railway Station at around 4 pm on Thursday.