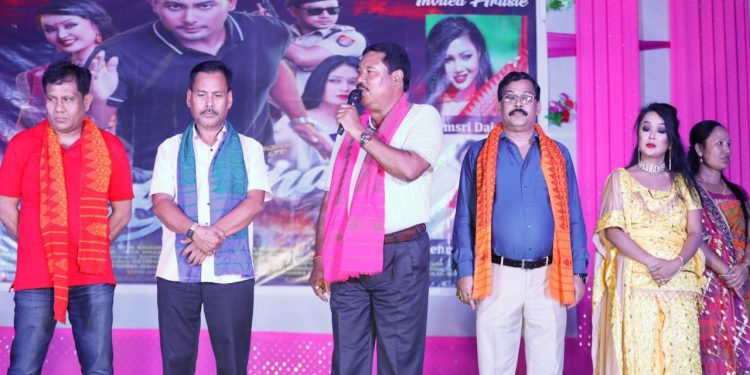 The premier show held at R N Brahma Memorial Field, Ramfalbil was inaugurated by MLA of No-29 West Kokrajhar constituency Rabiram Narzary in presence of producer and other dignitaries.

An artistes’ evening was also held in connection with the releasing of new film where noted artistes like Helina, Fuji, Jenifer, Gemsri, Sukbir, Riya,Thaklai showcased their performances.

Addressing before the huge spectators, the local MLA Rabiram Narzary said film industry was one of important sectors to give career opportunities to the youths and other artistes.

He said RB Film Productions had been playing important role in the development of film industry and it emphasized on modern and new techniques at par with the Hindi cine world.

He also said the cinema could reflect the culture and traditions of the society.

Narzary said there was no proper infrastructure for showing Bodo films in the region.

He said there was need of infrastructure development to boost the film industry in BTC.

He also hoped that the new film would be a big demand in the locality.

Producer of the new film Riya Brahma said she was happy to see the rush of several hundreds of spectators in the premier show that inspired her.

She said this was her fourth film which she considered it to be a success.

She also hoped that people of the region and cine lovers will inspire her efforts.

The story of the film was written by Pankosh Lahary while the direction was given by Raja Narzary.