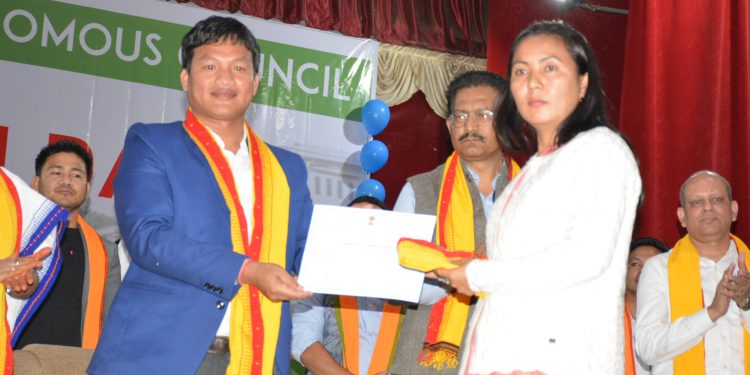 A view of the celebration of NCHAC's 68th foundation day on Monday at Haflong. DIPR

Chief executive member of NCHAC Debolal Gorlosa graced the occasion as the chief guest of the programme accompanied with many other dignitaries.

Principal secretary of the Normal sector Mukut Kemprai welcomed all the guests present and began the programme. The crowd comprised of people from various fields including the gaon burhas. Cultural programme was also presented during the programme.

As a part of the celebration the gaon burhas were ceremonially handed over their honorarium. Achievers in various fields were also felicitated. During the programme Diksha Langthasa was felicitated for recently clearing UPSC securing 708th position.

Many achievers such as those who were recently awarded with doctorate degree were felicitated by the CEM and others who were present on the occasion – Dr. Humi Thaosen, Dr. Manha Bathari, Dr. Lilu Rani Hasnu and Dr. Sabina Langthasa.

While addressing the programme, CEM Gorlosa expressed his happiness on how people of this land are gradually rising and achieving success academically.

He stated, “Any talented youth in Dima Hasao shall not be held back due to financial hindrances or any other lack of scope, the council by all means shall help and encourage such people.”

Speaking about the achievements of the council various development activities are ongoing and that new schemes are being taken up which are rural centric and benefit the poor.

He also shared his concern about the gradual loss of forest and its resources and that there is a strict implementation of forest acts and very soon there will be restriction illegal activities of saw mills in Dima Hasao.

Stressing upon the importance of flaura and fauna, CEM Debolala Gorlosa said that no merciless killings of animals in the wild will be tolerated.

Others who spoke on the occasion were ST Jem Hrangkhol, Ranu Langthasa, Deputy Comissioner Amitabh Rajkhowa and Superintendent of Police Sreejith T.