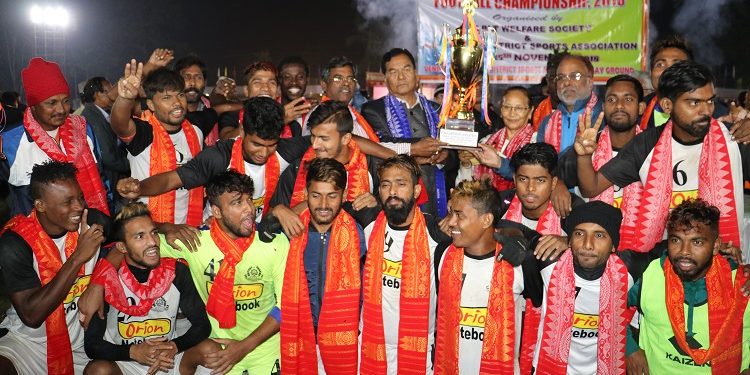 The tournament was organized by ex-BLT Welfare Society in association with Kokrajhar District Sports Association in memory of the martyrs of Bodoland movement, who had sacrificed their valuable lives for the cause of Bodoland.

More than ten teams participated in the 19th edition of Bodoland Martyrs Gold Cup this year.

He also said that BTC administration has been planning to construct several stadiums to conduct football competitions in the days to come.

Both teams were goalless in the full time of the match.

Assam Social Welfare Minister Pramila Rani Brahma, president of Assam Football Association Hemendra Nath Brahma attended the closing ceremony and handed over the trophy along with a cheque of Rs one Lakh to the champions team Mohammedan Sporting Club, Kolkata of West Bengal.

BTC EMs Doneswar Goyary and Rajib Brahma gave away the runner-up trophy along with a cheque of Rs 50,000 to Oil India Sports Club, Duliajan of Assam.

Janamohon Mushahary, president of ex-BLT Welfare Society handed over the best player’s award to Pilip, who hails from Ghana and has been playing for Mohammedan Sporting Club, Kolkata.