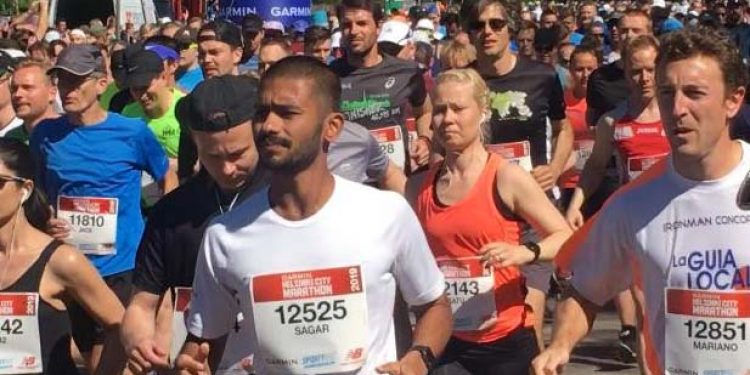 A highly-educated youth from Mangaldai town in Assam’s Darrang district has brought laurels to the district and the state by participating in a marathon race in Finland.

He is none other than Sagar Rai Deka, a 29-year-old youth, who joined the 39th edition of 42 km Helsinki City Marathon that held in the capital city of Finland on Saturday.

The Helsinki City Marathon was joined by as many as 3000 participants from different corners of the globe.

This coveted information for the people of Mangaldai in particular and Assam in general has been received over the phone from the parents of Sagar – Upasana Deka, a prominent child activist and Mukul Ch. Deka, a well-known industrialist, who are with him during his adventure.

They further informed that only sixty per cent of the participants were able to complete the marathon.

Earlier, Sagar participated in the 42 km International Ergo White Nights Marathon at St. Petersburg in Russia and in 42 km Ladakh Full Marathon at Leh, which is known as the highest marathon in the world at 11,500 ft above sea level.

He is the grandson of business tycoon Sunanda Ram Deka, the founder of SRD Group of Companies. After his primary schooling at Rupkonwar Jyoti Prasad School in Mangaldai, Sagar cleared his secondary education from Scindia School in Gwalior and completed his graduation from Hindu College in Delhi.

Currently he is engaged in his ancestral SRD Group of Companies and is regularly participating in all the events of cycling and marathons organized in the district as well as the state.