Meeting deliberates about waste management; door to door collection of garbage from each household to keep town clean and hygienic 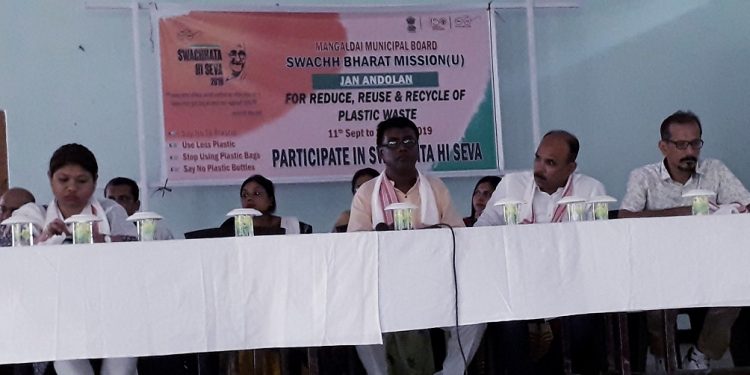 Mangaldai Municipal authority of Assam’s Darrang district on Wednesday organized a public meeting against the use of single use plastic goods.

It was part of their six weeks long cleanliness public campaign ‘Swacchatai Seva’ under the Swachh Bharat mission (Urban).

While inaugurating the meeting at Sainik Bhawan, Mangaldai legislator Gurujyoti Das highlighted on transforming garbage into some useful products.

She underlined how Ambikapur in Chhattisgarh became the cleanest city in India with the help of local women SHGs.

The meeting presided over by Manik Sil Sarma, chairman of the local civic body was also addressed by several other speakers.

The speakers discussed several relevant issues related to the refuse, reduce, reuse and recycling of the plastic goods.

Stress was also given on public health hazards due to unscientific garbage disposal mechanism of a section of medical diagnostic centres.

The speakers also dwelt at length over the menace of drawing of garbage from the municipal dustbins by straying cattle and misuse of the public dustbins by a section of citizens.

The progress of the ongoing scientific fecal sludge management mechanism of the Board was also discussed.

The project is in joint collaboration with a Switzerland based organization and a local NGO.

The meeting also discussed the proposed programme for door to door collection of the segregated garbage against a daily fee of Rs two from each household.

Later talking to the Northeast Now, Amulya Saharia, assistant engineer of the Board said, “This will be followed by public awareness meeting in each of the ten wards of the municipality and necessary training programmes for the SHGs through their Area Level Federations (ALF).”