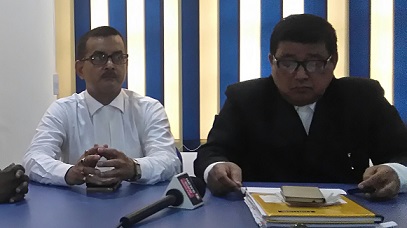 The internal conflict between the Members of the Foreigners’ Tribunals (FTs) in Darrang district, which has reportedly been continuing for the last couple of months, has taken a serious turn as the Mangaldai Bar Association on Sunday demanded removal of the same from the district.

The Mangaldai Bar Association held an urgent general meeting on Saturday afternoon where a slew of unanimous resolutions were taken including condemnation of some of the acts of the FTs in the district and demand for removal of the FTs.

Informing about the resolutions taken in the emergency meeting, Mangaldai Bar Association president Madhab Rajbongshi, secretary Sailendra Kr Sarma Barua in presence of its adviser Ram Singh and assistant secretary Akbor Ali, during a press conference at the library of the 100 year old lawyers’ body, expressed strong resentment over the alleged negative attitude of the Members of two FTs of the district – FT-1 and FT-4 – towards the lawyers and their respective clients.

The office-bearers of the bar association alleged, “The two Members of the FTs in Darrang ill-treated and misbehaved with our members in front of our clients. They also inflict mental torture on our clients and this way they have repeatedly been humiliating the self-respect and profession of the lawyers.”

They also alleged, “The FT Members never accepted written statements prepared in Assamese and sometimes don’t even bother to throw it away.”

The bar association members also told media persons that a delegation of the lawyers’ body also met both the judges physically and requested them to sort out the alleged conflict. However it didn’t work and the lawyers’ body moved the Deputy Commissioner, Darrang requesting his intervention. But it also failed to make any impact.

The Mangaldai Bar Association leaders also alleged that the FT Members used to pass some derogatory comments before the lawyers over the official power of a Deputy Commissioner to control their affairs.

Quoting the FT Members, Mangaldai Bar Association president Rajbongshi said, “The FT Members told us – you have filed complaints against us. What hell this DC can do against us? Can a DC take any action against us?”

“We have nothing to say over the judgments of the Members. But they have no right to humiliate our members. They must allow us to follow the proceedings in a conducing atmosphere,” association secretary Sarma Barua said.

Earlier, the bar association resolved in its general meeting to move the Gauhati High Court, the Chief Minister and the Law Minister of the State for their urgent interventions in the issue and make necessary arrangement for early removal of  both the FT Members from the district to avoid worsening of the situation in near future.