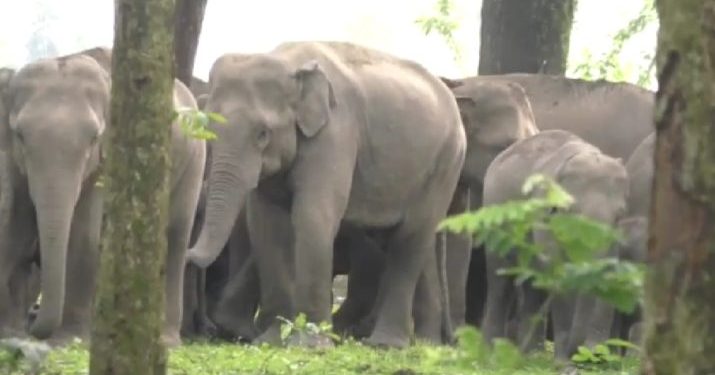 The Forest department and conservationists seem completely ignorant on the rising causalities of man-elephant conflict in the Indo-Bhutan border villages in Assam’s Udalguri district.

The human and elephant fatalities accruing from the raging human-elephant conflict have reached an unprecedented high in the district in the past couple of years.

A wild jumbo was electrocuted at 5 No Bhutiachang in Udalguri district on Sunday night. The exposed electric lines are usually deployed by villagers to prevent wild jumbos destroying their fields where the elephant died.

The miscreants also took away the finger from the tip of the trunk of the jumbo taking advantage of the darkness.

“The wild elephants continue to unleash terror and destroy crops for which the farmers in the areas have stopped cultivating paddy. We are forced to deploy such power lines,” said a villager on anonymity.

“We should look for alternative ways to save the crops of the farmers as they have to incur huge losses,” the wildlife activists opined.

Conservationists feel that the absence of a focused approach by the Forest department and the State Government as a whole has added to the intensity of the conflict.

“Key issues, like deforestation and degradation of forests, must be addressed as a matter of policy. Growing fragmentation of elephant habitat and movement corridors are having a worsening impact on the conflict,” nature lover and president of Human Rights Forum, Tangla, an NGO told Northeast Now.

“Elephant habitat in reserve forests is not only getting degraded and fragmented, but is also shrinking rapidly, causing drastic reduction in the carrying capacity. It is not surprising that the conflict is now being witnessed in areas previously not exposed to such conflict,” he said.

If statistics are anything to be believed more than 115 people and 56 elephants lost their lives in the past six years in Udalguri district including one killed on Sunday night.

The nature lovers and conservationists have strongly resented the inaction of the Forest department which has added to the woes of the people.

They have exhorted the State Government to formulate policies to tackle the menace of man-elephant conflict.