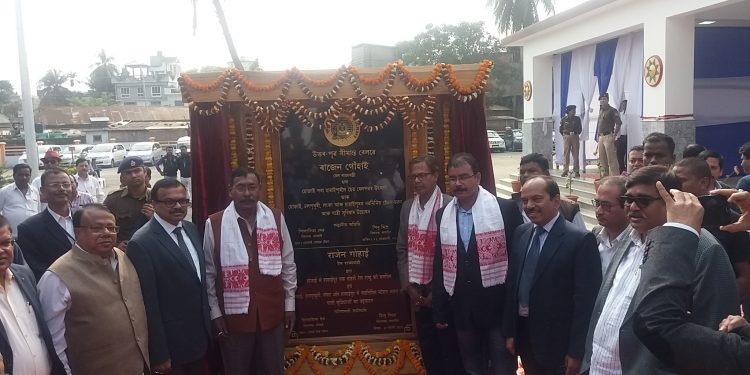 Union minister of state for railways Rajen Gohain formally unveiled the doubling of track from Hojai to Habaipur, new station buildings and passenger amenities at Hojai, Dhalpukhuri, Lanka and Habaipur from Hojai railway station in Hojai district of Assam on Thursday.

Speaking on the occasion, Rajen Gohain lauded the efforts of Prime Minister Narendra Modi for the over-all development of the nation in quick span of time.

“If Narendra Modi government continues to govern soon India’s name will be listed with the powerful and developed nations of the world,” Gohain added.

He said,”Our Government is committed and is working with the mantra ‘Sab Ka Saath, Sab Ka Vikash‘ without any loophole, every sections of society is being benefited with our welfare schemes.”

He further appreciated the employees and engineers of railways for completing the task of doubling 20 km Hojai to Habaipur section within one year of its commission in the year 2018 and the newly constructed buildings of four stations.

Hojai’s MLA Shiladitya Deb said,”Historic day for the citizens of Hojai district because in very less time four new stations we never dreamed off, we are grateful to minister of state for Railways Rajen Gohain.”

“We request every citizen of Assam and every organization not to stop any train for any demonstration and never ever damage public property for any agitation,” Deb said.

He further informed on February 27 next, foundation stones will be laid down for a fly-over in Lanka and a district hospital for 200-bedded capacity at Sankardev-Nagar in Hojai.

Lumding’s MLA Sibu Misra said that due to vote bank politics by previous government it took much time to form Hojai district.

“In last three years there was massive development in entire Hojai district and as such communication gap has been reduced,” Misra said.

Also, it will increase traffic carrying capacity and smoothen train operations in crucial Guwahati-Lumding section. This modern stations at Hojai and Lanka are equipped with top class amenities, high standards of aesthetics and enhanced passenger experience.