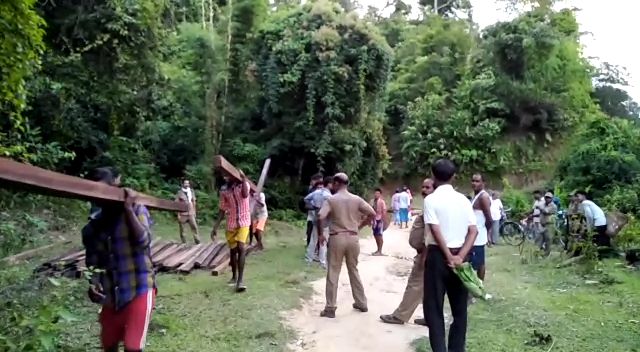 The seizure was made following a raid at Punir Hawar area under Dholai constituency in the district.

The forest range office personnel of Dholai on a specific tip off rounded up the area and seized illegally smuggled timber worth lakhs of rupees in the market.

Though the smugglers managed to flee from the spot, the forest personnel could also seize one mechanized wood cutter, chains and ropes that pull a tree down, informed, the beat officer of Bishnupur under Dholai range.

Successfully conducting a raid in the deep jungles of Bishnupur-Anandakhal border area, the beat officer of Bishnupur, R Jimmy, speaking to Northeast Now said, “We conducted this raid with forest personnel brought from other neighbouring beat offices after we learnt that rampant cutting of trees was going on in this area.”

Beat officer, Jimmy, added, “Upon reaching the area we saw these timbers in huge numbers kept hidden under bushes and an electric hex saw worth more than Rs 50,000 was also found used by these smugglers to cut down trees in this area.”

Range officer of Dholai, Mujibur Choudhury, who too reached the spot having learnt of this big breakthrough, speaking to this correspondent, said, “We, however, could not nab the offenders, but, would keep a close watch over this area.”