Assam Governor Prof Jagdish Mukhi visited Hojai district on Tuesday and held a meeting with the Deputy Commissioner and heads of different departments and took stock of the developmental works along with prevailing law and order in the district, stated a Raj Bhawan press release.

The Deputy Commissioner, Dr S Lakshmanan apprised the Governor of various developmental projects being undertaken in the district.

Taking a keen interest in Swacch Bharat Abhiyan, the Governor said that all the offices and the educational institutions should strictly adhere to cleanliness and on 7th of every month all should devote at least one hour for cleaning their respective offices. He also asked the Deputy Commissioner to inspect at least six institutions on that day so that a sense of responsibility is evoked in all the citizens and a positive work environment is developed.

Prof Mukhi also asked the Deputy Commissioner to use his administrative machinery to motivate all households to make swachhata  a habit and contribute to make the society clean and green. Deputy Commissioner Dr S Lakshmanan also informed the Governor that two municipal areas in the district have been declared open defecation free and the district administration is on its toes with its men and materials to reach out to all areas to motivate and generate awareness among the public for cleanliness.

Prof Mukhi also asked the Deputy Commissioner to fulfill the target of Ujjwala scheme and provide LPG connection to the households as per the norm. 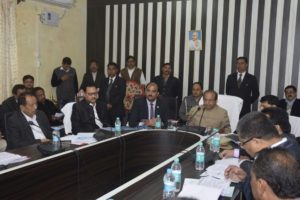 He also asked all the district functionaries to be punctual and transparent in their dealings and contribute to the development of the district as well the State.

Later, Governor Prof. Mukhi also held a meeting with the NGOs, the academicians and members of the SoS Children’s village of the district, the release added.