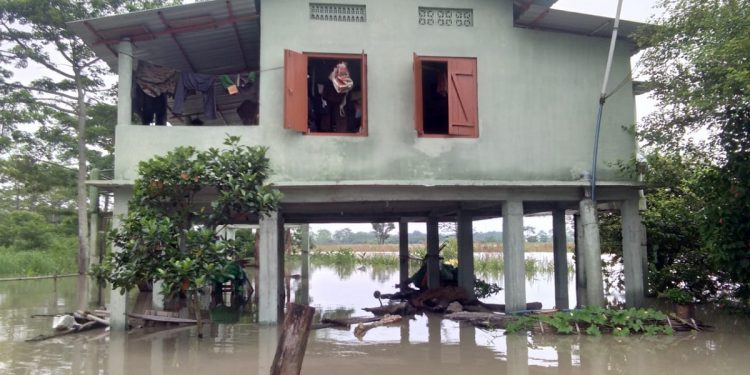 Even as the entire state of Assam is reeling under severe flood, the wildlife is also not spared.

After Kaziranga National Park (KNP), the flood situation in the Orang National Park (ONP) located on the north bank of the Brahmaputra in Assam’s Darrang and Sonitpur districts, is in a critical state since Saturday with most of the park being under water.

On Monday, the divisional forest officer Ramesh Gogoi accompanied by Dr Budhin Ch Hazarika, Honarary wildlife warden of Darrang made an on the spot survey of the national park.

The forest officials took stock of the damage done by this year’s flood in the national park.

They have told Northeast Now, they have witnessed a tiger stranded in a highland surrounded by water on all sides.

They particularly visited the Belsiri camp where there is most concentration of wildlife and which part of the national is worst affected.

Even other animals, like wild buffaloes and deer are also taking shelter in highlands as the park is reeling under flood water.

The Orang National Park is the only stronghold of rhinoceros on the north bank of the Brahmaputra river.

Meanwhile three poachers have been nabbed while attempting to poach wild animals taking advantage of the vulnerable situation.

The carcass of a deer and a wild boar were also recovered from them.

The miscreants have been identified as Md Abdul Kalam, Md Hazarat Ali and Md Mohidul Islam.

All the three have been booked under wildlife protection act and necessary investigation has been initiated against them.

The people living in the fringe areas of the Orang National Park are also moving away from their place of habitation in search of highlands to save themselves and their livestock from the fury of the flood.