As per preliminary assessment, around 500 schools have been damaged by flood in Dhubri district: Official 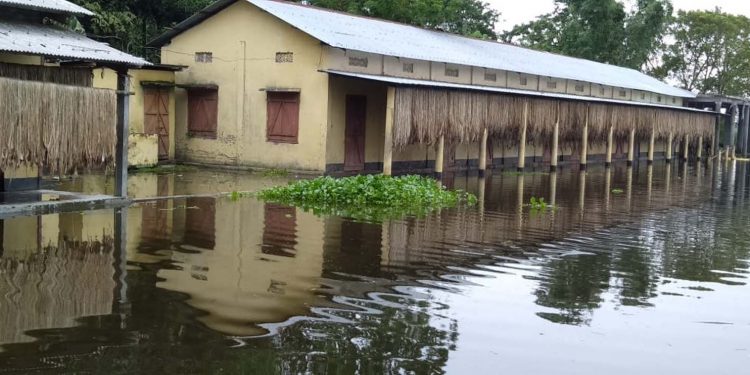 The recent wave of flood in Assam’s Dhubri district not only ravaged the civic infrastructure but also gave a severe blow to the education system in district.

A large number of schools particularly in the char and riverine areas of the district have either been damaged or washed away just when summer vacations were coming to an end on July 31, 2019.

D.K. Sharma, district elementary education officer (DEEO), Dhubri said, “Although the exact figure of the affected educational institutions in district has not yet been final as the assessments about the damages are under process.”

“But as per the preliminary assessment and reports, around 500 schools have been damaged while 17 schools across the district have totally been washed away by flood,” said Sharma.

According to the education department’s statistics before the floods, total 2,017 schools had been operating in six education blocks namely Gauripur, Agomaoni, Golakganj, Bilasipara, Chapor and South Salmara of Dhubri district.

Of these 2,017 schools in the district, total students’ enrolment is 2,96,303 during the current academic year that began in January.

According to the assessment of the Dhubri District Disaster Management Authority (DDMA), the floods have directly affected around 11 lakhs of population when it was in peak.

Floods have claimed 12 lives while over 70,000 inmates have taken shelter in a total of 181 relief camps, maximum of which were opened in schools across the district.

Rofiqul Houqe, district project engineer, SSA, Dhubri said, “We have lost our connection with many schools.”

“The education department will meet soon with the school management authorities to discuss the measures for the resettlement of affected schools and students,” Houque added.

A total of 104 schools were converted into relief camps while few schools are still facing waterlogging problem, he added.

“We have prepared a summary sheet of Rs 742.32 lakh showing the total sum of tentative cost against damages due to flood and would be ready to send to the government for approval,” said Houqe.

Although the exact data of the students on rolls in the destroyed schools was not available with department, but it is expected that over 25,000 students will be facing a bleak future.

The students fear that they may not be able to continue their education as their families have lost everything in the devastating flood.

On condition of anonymity, an official of the district elementary education office, Dhubri, said that till now, no any instruction has been received from the government side regarding the functioning of the destroyed and damaged school.

Adding further, he said, “We are going to issue a direction at local level to the concerned school management authorities in order to continue the school by making a temporary arrangement in any nearby school in safer place so that the students can continue their education without any hamper.”

In this regard, headmasters of the nearby schools have also been directed to accept the students temporarily, he added.