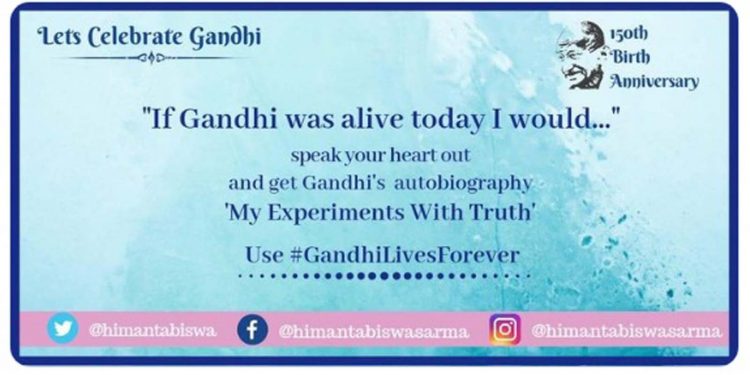 Assam finance minister Himanta Biswa Sarma on Wednesday launched a unique way of gifting something special to the public on the occasion of 150th birth anniversary celebrations of Mahatma Gandhi.

The birth anniversary of Mahatma Gandhi is celebrated as Gandhi Jayanti.

Sarma asked the public to write a sentence on the comment section of his social media handles on what they would say if Gandhi was alive today and then post it on social media using the hashtag #GandhiLivesForever.

The minister will select 25 best entries and present them with Gandhi’s autobiography ‘My Experiments With Truth’.

The minister stated on his Facebook, Instagram and Twitter handles that he would thank Gandhi for the virtues he had taught had he been alive today.

“If Gandhi was alive today I would thank him for virtues he taught us,” Sarma added.

“What would you say ~ If Gandhi was alive today…. Send a sentence using #GandhiLivesForever in the comments below.I’ll send Gandhi’s Autobiography, #MyExperiementsWithTruth to best 25 entries,” he further added.

If Gandhi was alive today I would thank him for virtues he taught us.

What would you say ~ If Gandhi was alive today…. Send a sentence using #GandhiLivesForever

Sarma launched this social media contest as a mark of tribute to the ‘Father of the Nation’.

He also stated that cherishing the ideas of compassion, self-reliance, truth, equality, integrity, humility and respect for all would be fitting tribute to Gandhi on the occasion of his birth anniversary.