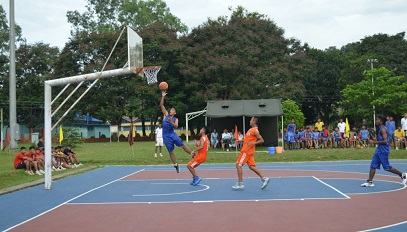 The East Zone Sainik Schools Sports and Co-curricular Championship was kick-started at the Sainik School Goalpara playground on Tuesday.

Maj Gen Arun Kumar, GOC, HQ 51 Sub Area and the chairman of the local board of administration of Sainik School Goalpara graced the occasion as Chief Guests. Maj Gen Bhaskar Kalita, GOC, 56 Infantry Division and an alumnus of the school, was the Guest of Honour.

This mega sporting event has been hosted by Sainik School Goalpara on behalf of the Sainik Schools Society, Ministry of Defence. The event will conclude on May 14, 2018.

Around 290 cadets have participated in various sports activities like football (junior and sub-junior), volleyball, basketball and hockey.

In the co-curricular activities, the participants would compete in English and Hindi debate, quiz and a variety of entertainment shows.

Zonal championships are conducted every year in five zones – East, West, South, North and Central Zone – from which the best team for each game is selected for the Inter-Zonal (National) Championship held subsequently, informed Rajiv Sharma, media coordinator of Sainik School Goalpara.

The Chief Guest met all the participating teams. He also inaugurated the Knowledge Hub (a computer based self-learning centre) in the school. The opening ceremony was followed by 100th LBA meeting of Sainik School Goalpara, chaired by Maj Gen Arun Kumar.

An SBI ATM was also inaugurated by Maj Gen Bhaskar Kalita at the Rhino Gate of the school. This is the only SBI ATM between Dudhnoi and Goalpara town covering a distance of 35 km and will cater to the requirements of the local villagers of Matia, Mornoi, Nepalikhuti and Dubapara. A regimental lunch was organised in honour of the guests and invitees.