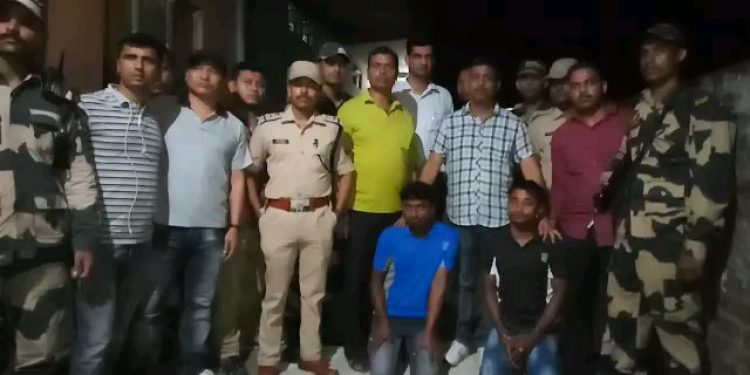 Contraband substances in the form of tablets worth a whopping Rs eight crores were seized on Wednesday night from a lodge in Hailakandi road of Silchar in Assam.

Two persons have been arrested in this regard, who were later identified as Biplab Dey, aged 30 years, and Shahjalal Mia, aged 28 years. Both of them are residents of Bairaginagar and Radhakishorepur of Tripura under Melaghar Police Station.

On Wednesday night, with inputs from 134 battalion of the Border Security Force (BSF) along with police personnel under Rangirkhari Town Outpost, a raid was conducted at Kathal point of Silchar and upon reaching a lodge named ‘Tripura Lodge’ in Hailakandi road, this team, recovered one lakh and sixty thousand banned tablets in 80 packets.

Police officials who conducted the raid opined that, both of them came to Silchar last Tuesday and were planning to move out in a wagon R registered with a Tripura state’s number plate on Wednesday night, when they were nabbed.

Just a few days back, a huge quantity of cough syrup too was seized from an Agartala bound train from Silchar by the RPF and that time too the culprits were found to have stayed in this Tripura lodge, for which, police are also investigating into that angle, informed, police sources.

Police officials are also investigating into the matter as to how such huge quantity of banned substances could get transferred to Biplab and Shahjalal who are just working as transporters and abetting the rich haul of drug trade through this route right up to Bangladesh.