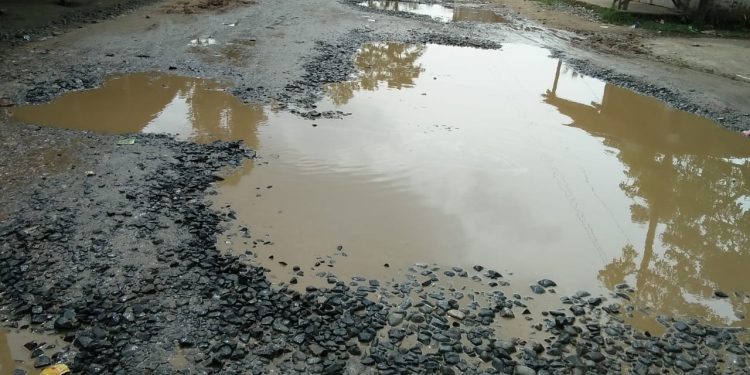 The dilapidated road conditions in the two constituencies of the Goalpara district in Lower Assam, West Goalpara and Jaleswar, are causing nightmare for the commuters.

As the damage of the roads remained unattended, they became bigger leading to entire stretches of roads getting riddled with large craters.

“The Lakhipur to Jaleswar road was repaired once two years back. But the quality of the work was so poor that it went back to its previous position within the next six months,” deplored a senior citizen at Lakhipur.

The Chunari to Lakhipur Road was also sanctioned for repairing in 2016-17 financial year and the local MLA, Abdur Rasid Mondal inaugurated the project in January, 2018. However, the works have not been finished till today due to some mysterious reasons.

Both the roads get exposed during the monsoon causing deep potholes and making life impossible especially for the students of Lakhipur College and Jaleswar higher secondary.

“This is what the government calls development,” fumes Abdul Jolil Mondal, a local student.

“The poor road condition slows down the trrafic leading to the increase of pollution level in the area,” remarked Rashma Khatun, another student.

Meanwhile, talking to Northeast Now, Banajit Adhikary, nodel officer of PWD roads informed, “the work order for the total 8 km road from Lakhipur to Jaleswar has been already given to the contractors. It is sanctioned under two schemes, Signature and SOPD (State owned priorrity development). We hope to see a new road within the next few weeks.”

While referring to the Lakhipur to Chunari Road, he said, “the contractor who received the previous work order didn’t turn up and as the road faced further damage, the department is coming up with fresh estimate.”