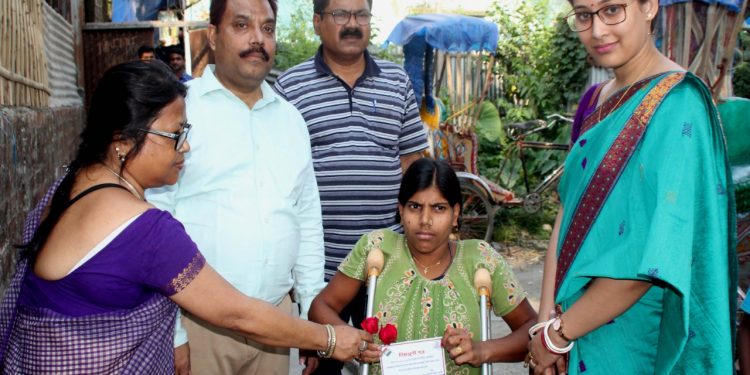 The Dhubri district administration has taken a noble initiative to invite the persons with disabilities (PwD) and senior citizen voters of the district, under the aegis of the Election Commission of India.

As being a part of the voters’ awareness campaign by the district administration, a delegation led by Animesh Talukdar, additional deputy commissioner (election) of Dhubri accompanied by other district officials on Sunday has knocked the door as many as 10 PwD including the senior citizens and invited them to cast their valuable votes on April 23 next.

It was a pleasant surprise moment for Gita Goala who is a person with disability (PwD) since herchildhood and a local resident of Ward No 1 of Dhubri town on Sunday when somebody knocked at her door located near at district Library of Dhubri town and when she has opened the door, it was the additional deputy commissioner and his other district officials was standing outside with a ceremonial invitation letter and a rose flower.

Gita Goala (30) and her other family members was awestruck on seeing a whole lot of visitors at her door and extended their heartfelt thanks to the district administration for taking such noble initiatives.

Animesh Talukdar, ADC (election), Dhubri said that this time, the district administration has taken special arrangements for the PwD and senior citizens to cast their vote without any hurdle at their respective polling station.

Apart from that, the district administration has also arranged wheel chairs for persons with disability and vehicles will also be provided to the concerned PwD to pickup them from their residence to the respective polling booths and again drop him back to their residence, Talukdar added.

The visit was part of an ongoing drive under ‘No voter to be left out’ by the administration to drive home the important message about the importance of exercising their franchise right and to shun gifts or any form of lucre.

The delegation handed out an invitation letter with flowers to the senior citizen voters and PwD respectively.