The tall claims of the BJP-led coalition government at providing electricity and better connectivity in the remote villages has fallen flat in the hill district of Karbi Anglong, which is considered amongst the most backward region in the state.

The present day scene in the interior villages of this hill district is perhaps the worst of all. It has been over two decades, that the tribal villagers, living in as many as 25 villages, on the other side of river Deopani hopes for development and good governance in the area.

This remote part of the Bokajan Assembly Constituency falls under the Deopani MAC constituency of KAAC, has remained unchanged, with no sign of development since independence.

Every year, during monsoon, a portion of the culvert which serves as the lifeline of the people living on the other side of the river is washed away by the gushing downstream water causing extreme inconvenience to the tribal people of the area. 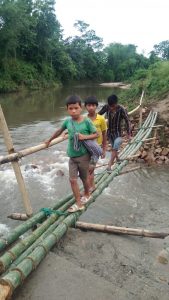 The culvert which serves as an indispensable part of the road, links over 25 contiguous tribal villages and hamlets to the mainland is facing government’s apathy for over two decades now.

Over the years, people living in these villages have been socially and economically marginalised due to apathy of the KAAC authorities.

“The expected development is still a distant dream for the people here due to the lack of a concrete bridge over Deopani River,” said a local resident while towing his bicycle over shoulder to cross the river.

Agriculture is the prime occupation of the inhabitants here and monsoon means greater peril for the residents. “We cannot carry our agricultural produce to the market across the river and have been facing tremendous hardships to make both ends meet,” said a farmer who was sitting by the banks in tattered shirt, hoping for the water level to recede.

What’s worse and disturbing is the fact that the students from both side of the river have a very difficult access to education. Small school going kids are witnessed commuting to school on the risky narrow bamboo plank in a regular basis.

This has also indirectly affected the morale of the students for opting education and the number of drop out has been rising alarmingly.

The remote areas of Karbi Anglong lack the basic amenities of health, education, connectivity and have witnessed a slow pace of development.

The KAAC was formed under the sixth schedule of the Constitution to empower the tribals and safeguard their political, cultural and linguistic identity.

However, endless corruption and mismanagement of developmental funds have completely jeopardized the socio-economic development of KAAC administered areas.